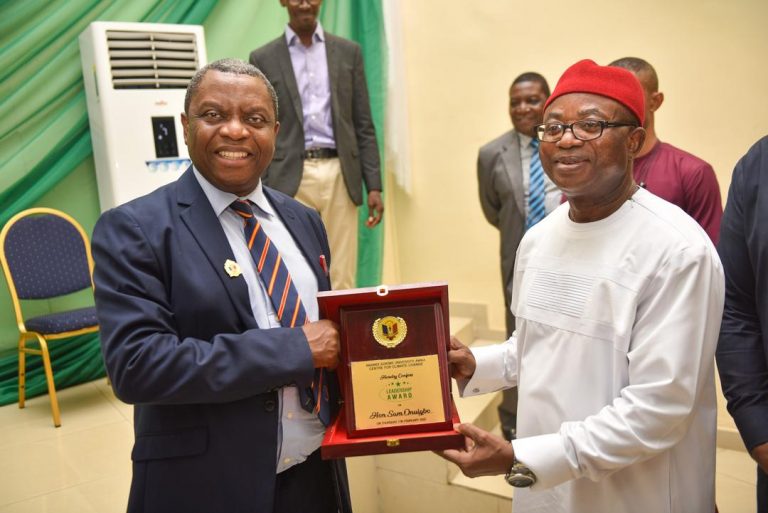 Presenting the award to Rep. Sam Onuigbo (who was the guest of honour and keynote speaker), the Vice Chancellor of Nnamdi Azikiwe University, Prof. Charles Okechukwu Esimone, thanked Rep. Onuigbo for gracing the event, and extolled his doggedness and resilience in birthing Nigeria’s Climate Change Act.

Also speaking at the Occasion, the Director, Centre for Climate Action, Dr Emma Ezenwaji, remarked that climate change has moved from the realm of speculation to that of reality, stating that Rep. Sam Onuigbo’s efforts in tackling the effects of climate change makes him stand tall above many, while also calling for a concerted community climate action.

Receiving the award, Rep. Sam Onuigbo thanked the Nnamdi Azikiwe University community for considering him worthy of being a recipient of the leadership award in recognition of his efforts in ensuring that Nigeria meets her climate change mitigation and adaptation goals. “It is a recognition of hard work and motivation to do more,” he said, adding that the success attained was as a result of the collaborative efforts of many stakeholders.

Speaking on the theme of the summit: “Limiting Climate Change through Local Action”, Rep. Onuigbo expressed optimism that the Climate Change Act will serve as a template to guide and position Nigeria to effectively leverage opportunities, as we move towards the inevitable future of low carbon emission. According to him:

“What is more critical however is the fact that the law we enacted is one that addresses a key issue which poses an existential threat to all of mankind. While some of us may not know it, the overarching impacts of climate change are daily faced by us even in Nigeria. From the many gully erosions that litter the Southeast, through the floods, coastal erosions in the South South and even some parts of the Southeast, to desertification in the North and the corresponding security issues, to extreme heat and irregular rainfall, before our very eyes, the world as we know it is changing and bringing with it massive loss of livelihood and increased health challenges.“

Hope however lies in the fact “… that there is still a little time for us to turn this around and in the process of tackling these challenges, build a greener and more sustainable world anchored on the principles of equity, greener and more jobs for the people, better health, and increased livelihood means.,” Onuigbo concluded.