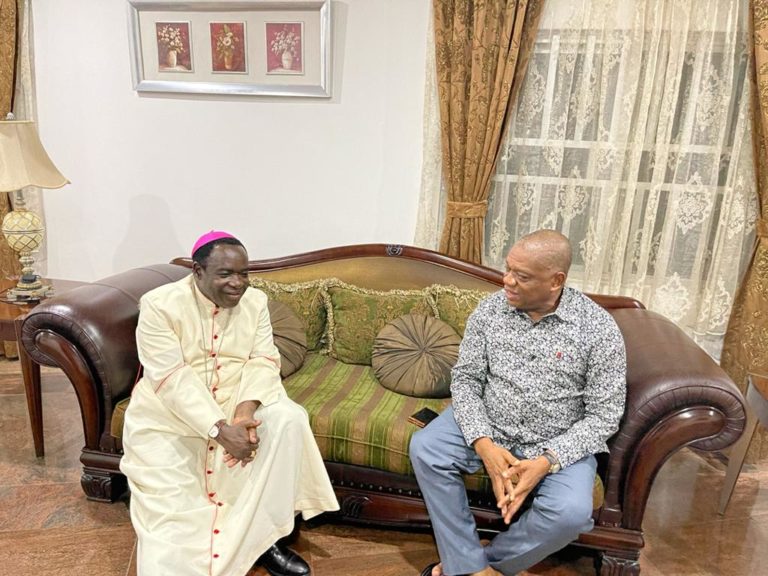 Famous Prophet Joshua Arogun, General Overseer of Light of the World International Church, Lagos, says that one out of three major conspirators of Senator Orji Uzor Kalu, Chief Whip of the Senate and former Governor of Abia state is dead , the second has been shamefully removed from office while the third is suffering silently..

The prophet whose predictions are rated accurate by many pronounced this prophesy today, Sunday during service in Lagos, noting that more conspirators against Sen Orji Kalu will die in mysterious ways to fulfill God’s word.

He described Kalu as a carrier of the divine grace of God, noting that “the amount of grace Kalu has is enough to worry those conspiring against him because more will die mysteriously”, he declared.

He said people who knew the former Governor from childhood will attest that he has mysterious forces working for him that put his enemies in great danger.

He revealed that the judge earlier conscripted to jail Kalu will end badly and will suffer incurable ailment. He reminded the congregation of his warning to the three major conspirators that jailed Kalu , adding that the newly recruited ones will die mysteriously.

It will be recalled that Prophet Joshua was in the news in 2014 when he controversially predicted the victory of President Muhammadu Buhari in 2015 general election. He also predicted his re-election in 2019 .

He once advised Prophet TB Joshua’s church members to get enough of him at that period as God will take him away mysteriously.

Also barely three months after Kalu was jailed for of 12 years following the judgement from Justice Muhammed Idris of the Federal High Court Lagos , the Cleric had made a controversial statement that shocked Nigerians . He did not only predict the release of Kalu after six months which sounded impossible but also revealed God has chosen him to be the next President after President Muhammadu Buhari.

He said Kalu committed no offense but was been witchhunted by people who are afraid of him taking over from Buhari .

According to his revelation about Nigeria’s political dynamics in the 2023 general elections. ” I saw a man in Prison and this man has been a former Governor from the South East taking over from President Buhari. There is absolutely nothing one can do about someone’s destiny especially when sanctioned by God. Everything that happens in life is for a reason. I saw renewed alliances among the political class and across the political parties and I saw this country reuniting more than it has ever done before. God loves Nigeria so much. Nigeria is a big country, and is blessed with human and natural resources.” He had said.

The cleric also lampooned Kalu for not visiting his church to thank God for the messages he has been receiving through their ministry. He said Kalu’s defiance to his earlier call, warning him not to be selective in his Thanksgiving seems not to have yielded any result.

He complained that Kalu visited Pastor Chris Oyakhilome of Christ Embassy late last year and ignored himself , Pastor Enoch Adeboye and Pastor Lazarus Muoka who God also spoke to about him.

He said , ” I mentioned it on this alter that he needed to come and also thank God in this church. He has visited Christ Embassy and that shows humility but he needs to do same to other churches . Pastor Adeboye and Lazarus gave similar prophesies and it all came to pass . I am not asking him to do anything for the church. We don’t need anything from him. It is just right for him to honour other servants of God as he honoured Pastor Chris . The man (Kalu) has so much grace but people are too jealous of him . The jealousy and hatred against him is too much and all he need is to continue to thank God for His love and grace upon him(Kalu).

Meanwhile, Kalu has distanced himself from prophecy noting that he is a catholic and does not believe in prophecy

Stating his position for 2023 Presidential election during an interview on Channels Television’s Sunday Politics, Kalu demurred, “I am not having Presidential ambition but if I am given, why not? I can take it.”

On the reports of the prophetic predictions regarding his emergence as next president of Nigeria. The Senate Chief Whip Kalu said, “I am a Catholic. In the Catholic church, we don’t see visions. Well, if visions are being seen, and people say this and that if it is the will of God that I will become president, why not? I am very capable mentally and otherwise to do whatever Nigerian people want me to do but not through prophecy.”