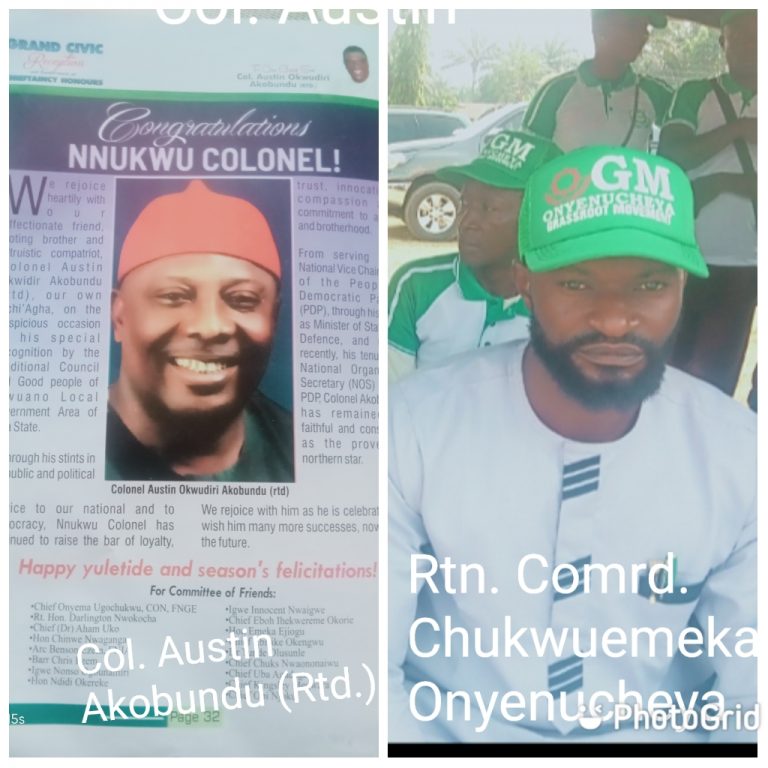 The illustrious son of Nchara Akanu who thanked God for the feats the Foundation has accomplished so far within a fraction of one year, restated his commitment to ensuring that the vision of the organization becomes a reality, hence improving lives and transforming communities.

He disclosed that Chukwuemeka Onyenucheya Foundation, (COF) has in its one year of existence affected the lives of people in Ikwuano LGA and in Nigeria in general.

“Today makes Chukwuemeka Onyenucheya Foundation one year and within this one year, we have affected lives of people in Ikwuano, across Nigeria and we’ve gone even beyond the shores of Nigeria. So, we look forward to hitting other continents of Africa as the years go by.”

Rtn. Onyenucheya disclosed this in an exclusive interview with Famousreporters.com, at Ikwuano Local Government Council, during the Grand Civic reception of Col. Austin Akobundu (Rtd.), the immediate past National Organising Secretary of the People’s Democratic Party, PDP.

Asked whether his magnanimous activities were politically motivated, he said:

“I want to correct an impression; I’ve always been a politician but I’ve not done so much politically in the Ikwuano space in terms of holding a political position. Somebody who is a comrade, who served in the Students’ Union Government, Abia State Universities, it took politicking for me to get to that height. Even in other states where I do my business, it takes politics for you to excel in life.

“This time, I’m coming back home; and I’m here to improve things in Ikwuano. Our leaders are doing great but there is always room for improvement so I really want to improve on some things.”

“We have just concluded a free medical outreach that cut across the four clans of Ikwuano: Ibere, Ariam, Oboro and Oloko. The outreach was quite impressive as we were able to reach all the four clans. We’re still giving out our palliative packages to indigents of Ikwuano. So, these were the things we’ve been able to do lately and we’ll still do more.”

Furthermore, the proud son of Nchara-Akanu whose vision has always been to impact positively on humanity, expressed interest in contending for a political position in the forthcoming 2023 general election, in his bid to improve the lives of the people.

“I’ve always been in politics but right now, I’m set to go into politics.
Come 2023, I’ll be vying for a political position under the platform of People’s Democratic Party, PDP but as time goes on, events will unfold itself. God gives power and the mandate is from God and He has spoken to some people and as such they have no other choice but to key in. So, we’re sure we’ll get there by God’s grace.

READ MORE:  Eight hurt in shooting at US mall, gunman still at large

Earlier, Onyenucheya who congratulated Col. Akobundu on the Chieftaincy title conferred on him, described the latter as one of the shining lights of Ikwuano, pointing out that his success has brought the council to the limelight.

“We’re here to express our love for him and as a leader who has attained such great heights, this is the least we can do, to give him our warm embrace and to honour him and confer on him a Chieftaincy title.”

Onyenucheya who exonerated Col. Akobundu (Rtd.) from his alleged poor performance as speculated, pointed out that:

“I will not say that he has done bad neither will I say he has done but he has been an ambassador of Ikwuano and we don’t have any man who has attained such heights politically in the party in Ikwuano and this has written Ikwuano on the map. So, he has done well and for those who say he hasn’t done well, they have a chance to get things better this time. If there’s anything they expect from the government, they should throw it out. People have the mandate to tell those in leadership position how they want them to rule them”.