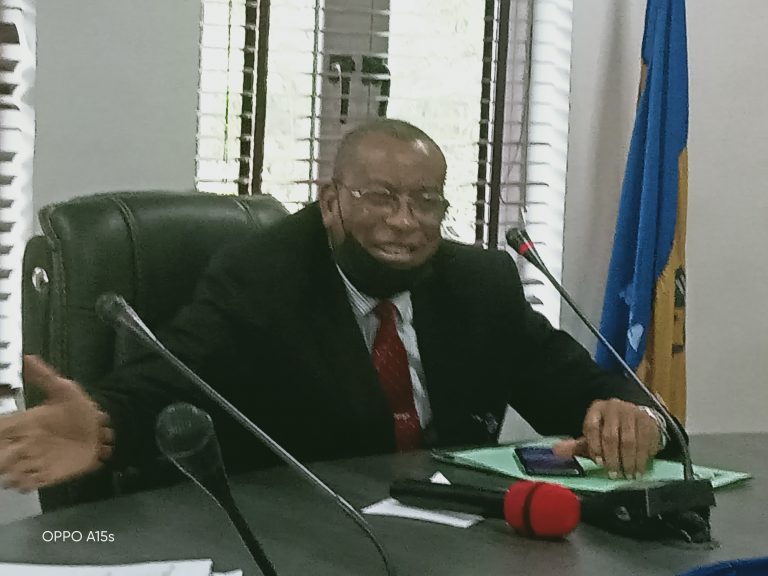 The Vice Chancellor of Abia State University, Uturu, ABSU, Prof. Onyemachi Maxwell Ogbulu has enjoined Nigerians not to hesitate to run to President Mohammadu Buhari for safety, if under any form of threat, saying he is the Chief Security Officer of the country.

The Vice Chancellor who holds a Ph.D in Finance from Abia State University, Uturu, (2007), lamented that the issue of security, in accordance with the constitution “lies squarely on the President and not even the Governor”, he said.

He described insecurity as a Global challenge, stressing that same which is neither restricted to Abia State, nor the Southeast region is rampaging the entire Nigerian nation, adding, “Abia State is the safest state in the country and even in the South East as a whole. So, it’s a common problem everywhere but all we can think of is how to come out of this problem.

“Security is on the exclusive list of the Constitution. Let us face facts. It is strictly the duty of the President of a nation to protect lives and property and not the Governor, nor the local government chairman or any other rather it is the duty of the President, because he is the Commander of Armed Forces of the country.
So, if anybody in this country is under threat, then we should go to the President to be secured”, he insisted.

He, however, commended the various security agencies, ranging from the Army, Police, etc -or their support in providing security to the University and the ambient communities.

“But, within the confines of what is available to us, we have argumented our own resilient security with some of the security personnel like the Police, Army, DSS, and they have been very very helpful. They’re always around; the Police, the DSS, all of them are working in tandem and I sincerely appreciate them. We’ll do everything whatsoever to secure the lives and property of our students”, he added.

READ MORE:  Nnamdi Kanu Declares "An Eye For An Eye" For Any Biafran Killed By Nigerian Army

The Royal Vice Chancellor hinted that the the convocation ceremony slated for Friday, November 11, would be preceded by a Pre-convocation lecture, tomorrow, Thursday, with the theme: “Nigeria Political and Economic Future: The Dangers We can Avert”, which would be delivered by Hon. Chief Barr. Nnia Nwodo.

The 8th substantive Vice Chancellor of ABSU explained that the combination of the duo of 27th and 28th sets of graduands was consequent on the adverse impacts of the COVID-19 pandemic which evidently had rendered transfixed, activities of every nation of the world, as academic activities of the institution was not an exception.

He applauded the students’ academic excellent performances, with focus on Medical students, as he recounted on their effective combat against the extant pandemic.

Moreso, he commended the state Governor and Visitor to the University, Dr. Okezie Victor Ikpeazu Ph.D for his relentless efforts in ensuring the success of the convocation.

“At this point, may I with utmost humility thank the Governor and Visitor to the University, Dr. Okezie Victor Ikpeazu Ph.D in a special way for coming to the rescue of the University severally within these trying moments and for his untiring efforts to ensure that this particular xonvoca is holding as planned.”

Meanwhile, highlights of the unique, epoch making event, he outlined were commissioning of some projects executed by the University, conferment of First Degrees and Higher Degrees, Award of Honorary Doctorate Degrees on some Distinguished and Eminent personalities of Igboland, namely; Barr. Allen Ifeanyichukwu Onyema,, Chairman, Air Peace Limited- Award of Doctorate Degree in Public Administration (DPA).

Furthermore, there would also be the conferment of Emeritus Professor on my following:
Prof. S. O. Igwe- Professor of Education Finance; Prof. G. I. Nwaka- Prof. of History; and Prof. A. I. Nwabughuogu (Posthumous)- Professor of Economic History.