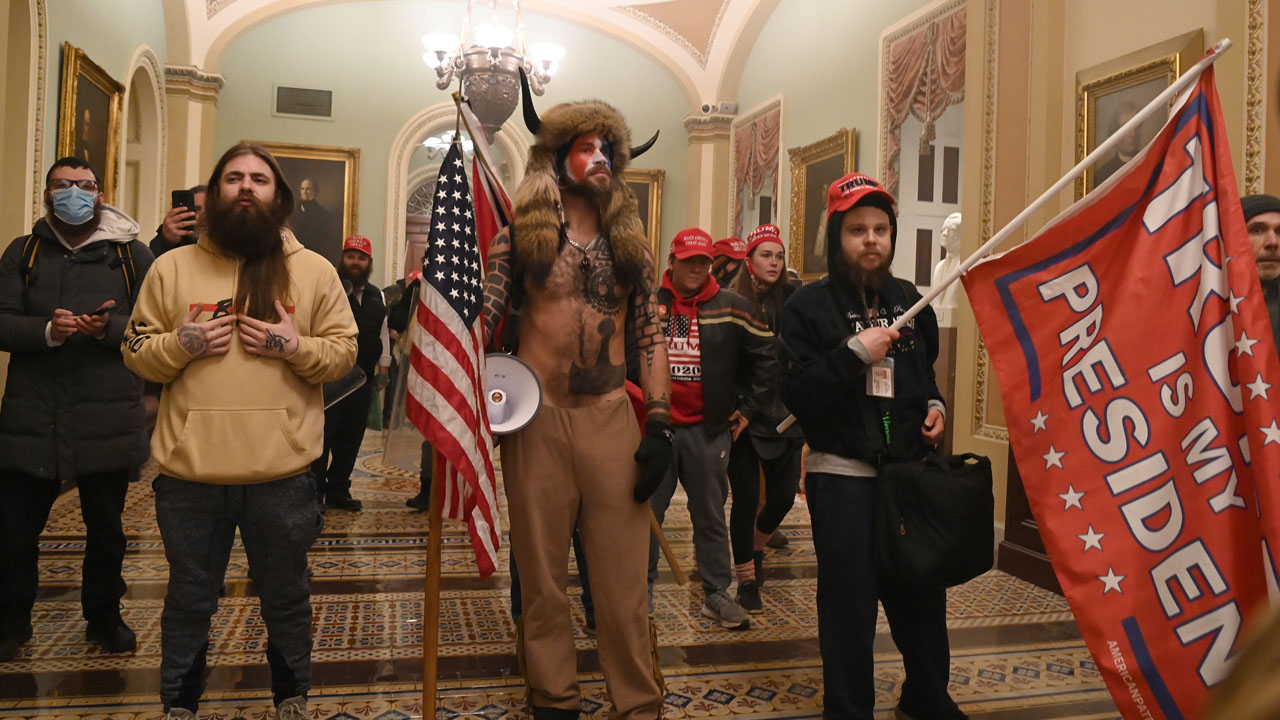 Supporters of US President Donald Trump, including member of the QAnon conspiracy group Jake A, aka Yellowstone Wolf (C), enter the US Capitol on January 6, 2021, in Washington, DC. – Demonstrators breeched security and entered the Capitol as Congress debated the a 2020 presidential election Electoral Vote Certification. (Photo by Saul LOEB / AFP)

Russian officials on Thursday pointed to the storming of the US Capitol as evidence of America’s decline, with one saying it showed US democracy was “limping on both feet”.

After the stunning events in Washington, many in Moscow said the United States was no longer in any position to lecture other countries on freedom and democracy.

Under banners reading “Storm of the Capitol” and “Chaos in Washington”, Russian state television showed rolling images of mobs of Donald Trump supporters breaking down barricades and swarming the building, as security forces fired tear gas and police drew guns inside.

“The losing side has more than enough grounds to accuse the winner of falsifications — it is clear that American democracy is limping on both feet,” Konstantin Kosachyov, the chair of the Russian upper house’s foreign affairs committee, said in a post on Facebook.

“The celebration of democracy has ended. It has, unfortunately, hit rock bottom, and I say this without a hint of gloating.

“America no longer charts the course and so has lost all right to set it. And, even more so, to impose it on others.”

Moscow has long bristled at US criticism of the state of Russian democracy under President Vladimir Putin, accusing Washington of hypocrisy and condescension.

Russian commentators gleefully pointed to Trump’s refusal to recognise the results of November’s election, and growing divisions in the United States, as evidence of the country’s decline.

The Kremlin has been accused of fostering those divisions with a campaign of interference and disinformation, including alleged attempts to disrupt the 2016 election in Trump’s favour that prompted an FBI investigation.

With Russians celebrating Orthodox Christmas on Thursday, there was no immediate reaction from the Kremlin or foreign ministry.

No more ‘beacon of democracy’
But pro-Kremlin lawmakers jumped on the unrest.

“The United States certainly cannot now impose electoral standards on other countries and claim to be the world’s ‘beacon of democracy’,” the foreign affairs chief in the lower house, Leonid Slutsky, told Russian news agencies.

He said Washington was suffering after having promoted “colour revolutions” around the world, like anti-Moscow uprisings in Ukraine and Georgia and the recent protests in Belarus.

“The boomerang of the colour revolutions is turning back on the United States,” Slutsky said. “All this threatens to turn into a crisis in the American system of power.”

Others appeared to use the events to justify Moscow’s domestic policies.

“Social networks must work under strict rules within a legal framework. Because absolute freedom of information is becoming a weapon in the hands of extremists,” he said in a post on his Telegram channel.

The United States and other Western countries have repeatedly condemned Russia for moves to tighten controls on social media.

Washington has been a fierce critic of moves by Putin to clamp down on dissent, most recently accusing Russia of “intensifying repression of its civil society” with a new law last month expanding rules against NGOs and media considered foreign agents.

Moscow says the US cynically uses claims of democratic failings to pursue its own agenda and maintain its global position.

Tensions between the Cold War-era rivals have hit new highs in recent years, with a raft of US sanctions imposed on Russian officials, disputes over arms control treaties and American accusations of major Russian hacking attacks.

You Were Elected to Serve the People— Rep....