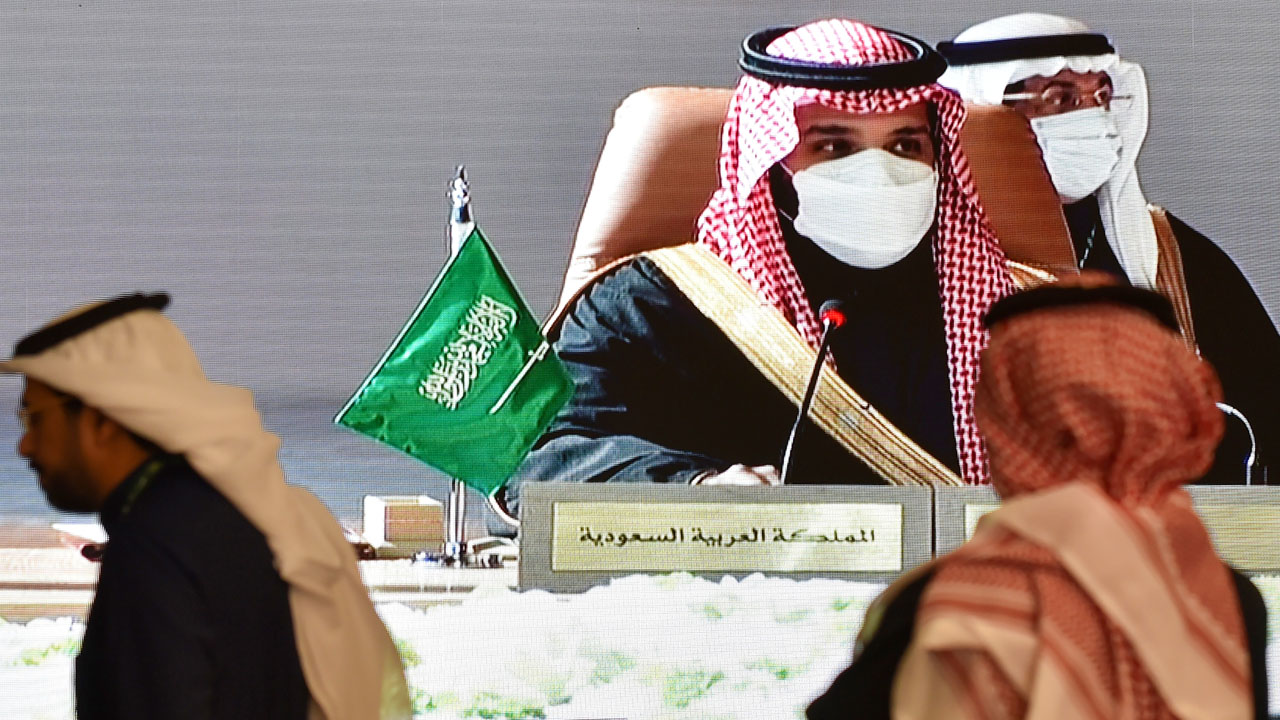 Journalists watch, Saudi Crown Prince Mohammed bin Salman addressing the attendees of the summit, on a screen in the media centre ahead of the 41st Gulf Cooperation Council (GCC) summit in the city of al-Ula in northwestern Saudi Arabia on January 5, 2021. – Saudi Arabia will reopen its borders and airspace to Qatar, US and Kuwaiti officials said, a major step towards ending a diplomatic rift that has seen Riyadh lead an alliance isolating Doha. The bombshell announcement came on the eve of GCC annual summit in the northwestern Saudi Arabian city of Al-Ula, where the dispute was already set to top the agenda. (Photo by FAYEZ NURELDINE / AFP)

Gulf leaders signed a “solidarity and stability” deal Tuesday after the leaders of Saudi Arabia and Qatar publicly embraced, bringing Doha back into the regional fold after a three-year rift.

Saudi Arabia had led a coalition of countries in the Gulf and beyond to cut ties and transport links with Qatar in June 2017, charging that it was too close to Iran and backed radical Islamist groups — allegations Doha denied.

Those countries, along with Oman and Kuwait which have mediated between the two sides, signed a rapprochement deal in the Saudi city of Al-Ula, after Riyadh overnight re-opened its land, sea and air borders to Doha.

“There is a desperate need today to unite our efforts to promote our region and to confront challenges that surround us, especially the threats posed by the Iranian regime’s nuclear and ballistic missile programme and its plans for sabotage and destruction,” said Saudi Crown Prince Mohammed bin Salman.

READ MORE:  Blinken says US to pay $200 million in WHO obligations

The details of the agreement were not immediately released, and analysts have warned that any deal could be preliminary in nature and may not immediately end all of the measures taken against Qatar.

But the warm welcome that Prince Mohammed extended to Qatar’s ruler Sheikh Tamim bin Hamad Al-Thani, with the pair embracing at the airport and then chatting animatedly, indicates a significant breakthrough.

Sheikh Tamim, visiting Saudi for the first time since the crisis began, was then whisked with the other leaders through Al-Ula’s dramatic Martian landscape to the shimmering Maraya Concert Hall, a mirrored structure situated in a nearby valley.

“These are first steps or a first phase of reconciliation that will be followed by other steps. Some may belittle that progress, but resuming open direct communication and avoiding verbal attacks is progress,” said Kuwait University assistant professor Bader al-Saif.

“The other states… will follow suit and pursue similar reconciliatory steps.”

US cheerleading
Washington had intensified pressure for a resolution to what Doha calls a “blockade”, insisting Gulf unity is necessary to isolate US foe Iran as the curtain falls on Donald Trump’s presidency.

Jared Kushner, Trump’s son-in-law and senior adviser who shuttled around the region to seek a deal, attended the signing in Al-Ula.

“The Trump administration will claim this as another victory for sure,” said Royal United Services Institute analyst Tobias Borck, stressing the boycott countries had not yet normalised relations with Qatar.

Kuwaiti Foreign Minister Ahmad Nasser Al-Sabah announced on state television late Monday that “it was agreed to open the airspace and land and sea borders between the Kingdom of Saudi Arabia and the State of Qatar, starting from this evening”.

Drivers south of Doha on the usually calm Salwa highway towards the Saudi border at Abu Samra sounded their horns and waved their arms from their car windows in the wake of the announcement, an AFP correspondent reported.

“We will see all Saudis here, also all Qataris will visit Saudi Arabia, and we will be friends as we were before and better,” said Hisham al-Hashmi, a Qatari with an Emirati mother, who wore a traditional thobe and winter headdress.

Bright new page?
Saudi media, which is influential throughout the region, quickly adopted a tone in stark contrast to past coverage of Qatar which had focussed on past transgressions and alleged crimes, instead of talking about “unity” and “fraternity”.

The Saudi-led GCC hawks, along with Egypt, in 2017 closed their airspace to Qatari planes, sealed their borders and ports, and expelled Qatari citizens. An information battle raged online with the two camps trading allegations and barbs, deepening the resentments.

Some observers have warned that the UAE could be the spoiler for reconciliation attempts, having heaped criticism on Qatar in the wake of the spat.

However, Abu Dhabi’s Minister of State for Foreign Affairs Anwar Gargash tweeted an image of the stunning Maraya venue, saying that “from the Hall of Mirrors in Al-Ula, begins a bright new page”.

The UAE and Qatar, in particular, remain divided over Doha’s perceived support for movements aligned to the Muslim Brotherhood and the two countries’ backing for rival groups in the Libya conflict.

However, the diplomatic freeze has only served to make Qatar more self-sufficient and push it closer to Iran, observers say. It has also hurt Saudi strategic interests.

At the start of the crisis, the boycotting countries issued a list of 13 demands to Doha, including the closure of pan-Arab satellite television channel Al Jazeera, undertakings on “terror” financing, and the shuttering of a Turkish military base in Qatar.

Qatar has not publicly bowed to any of the demands.

Fact check US articles of the week

Rep. Nunes on coronavirus: Probable that US will...

Are Hong Kong’s pink dolphins about to disappear?

What countries have not declared any known cases...