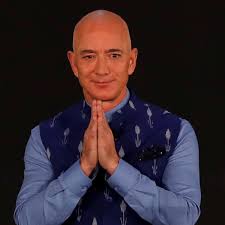 Exactly nine (9) days after Richard Branson, the founder of Virgin Group visited the space, the world’s richest man, Jeff Bezos has finally completed a brief trip to the space in his spaceship.

Reportedly, 57-year-old businessman, Bezos had taken off on Tuesday, in New Shepard, a rocket named after Alan Shepard, the first American in space, alongside four other persons

The spacecraft, built by Blue Origin, a rocket company owned by Bezos, rose from the company’s launch site in Van Horn, Texas, shortly before 9:15 and returned safely just after 9:30 Eastern time.

Blue Origin has launched New Shepard 15 times, and all had landed safely in space without anyone onboard.

READ MORE:  Trump on expansion of coronavirus testing in US

Even though the flight did not enter orbit, it was a milestone for the company that the investor started more than 20 years ago, the first time a Blue Origin vehicle carried people to space.

Report has it that, among the three persons who embarked on the said trip with Bezos on the New Shepherd was Mark Bezos, his 50-year-old brother.

Mark, as gathered is also the co-founder and general partner at HighPost Capital, a private equity firm.

Oliver Daemen, an 18-year-old student from the Netherlands, who had purchased a ticket on the second flight, happened to be the third passenger, while Mary Wallace Funk, an 82-year-old American astronaut, completed the team of four that landed on space with Jeff Bezos, the founder of Amazon.

On July 11, TheCable had reported that Richard Branson, the founder of Virgin Group, had become the first billionaire to travel to space.

The commercial astronaut, who travelled with five crew members on a Virgin Galactic spaceship, known as VSS Unity, described the journey as “Magical”.