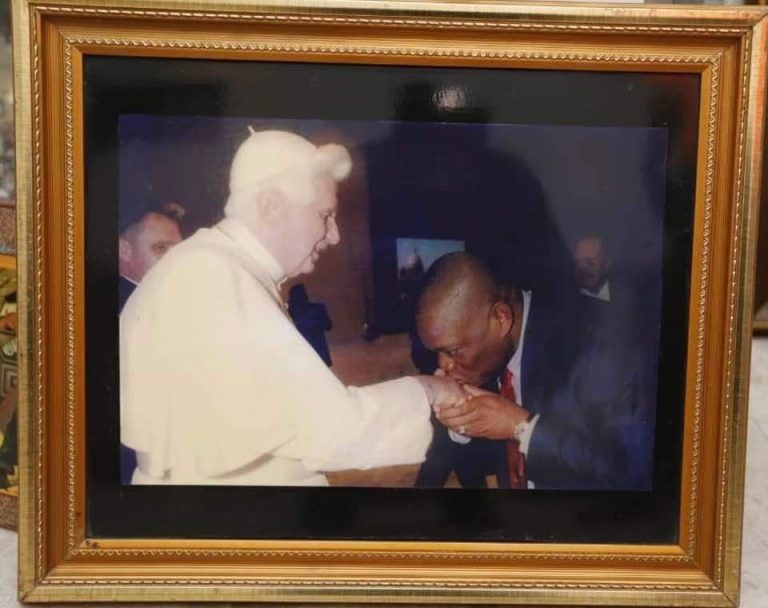 In the photos as shared by the former Abia Governor on his verified social media handle on Saturday 12th February 2022, captured the 2023 Presidential aspirant kissed the hand of the revered Catholic cleric in the tradition of Orthodox Christians to honor their spiritual father confessor and in veneration of the Body of Christ which the priest (pope) handles during the Divine Liturgy as he prepares Holy Communion.

The photo is reportedly to have been captured during The Forbes recognised business entrepreneur’s visit to the Apostolic Palace official residence of the pope, located in Vatican City of Rome in Italy.

Captioning the iconic photograph he wrote “During my visit to Pope Benedict XVI in Vatican City in 2005 . He became Pope  in the 2005 papal conclave that followed the death of Pope John Paul II”.

Following the statement was a picture of himself and the Pope Benedict XVI.
Pope Benedict XVI, full names ;Joseph Aloisius Ratzinger is a retired prelate of the Catholic church who originated from Germany, he served as the head of the church and the sovereign of the Vatican city state from 2005 until his resignation in 2013. Benedict’s election as pope occurred in the 2005 papal conclave that followed the death of Pope John Paul II.

According to findings, getting an audience with the Pope deemed the 6th most powerful in the world is not an easy task. However there are three options. The first option is to visit on a Sunday morning just before noon for a chance to see him for free. You ca this jn also get a papal audience ticket in St. Peter’s Square/Nervi auditorium or a ticket to the Vatican Hall.,,8q

Within the last two weeks iconic file photos of Senator Orji Kalu and influential personalities from both the local and international sphe,res have continued to dominate the Internet.

Days ago, a file photo of Orji Kalu with late global iconic leader and former South African President, Nelson Mandela went viral on the Internet. This was also followed by another photo which captured the moment he Presented his book to the Ex President of the USA, Bill Clinton.

He wrote “Throwback pictures of Myself Presenting a copy of the Book “Orji Uzor Kalu, the master Strategist” to President Bill Clinton of United States of America in Washington DC.”
Following this statement was a picture of himself and the Ex President of America, Bill Clinton.

Orji Uzor Kalu is a Nigerian politician and businessperson. He is the chairman of SLOK Holdings and the Daily Sun and New Telegraph newspapers in Nigeria.
He served as the Governor of Abia State, Nigeria from 29 May 1999 to 29 May 2007.

Senator Orji Uzor Kalu has revealed his ambition to run for the 2023 Presidential Election.