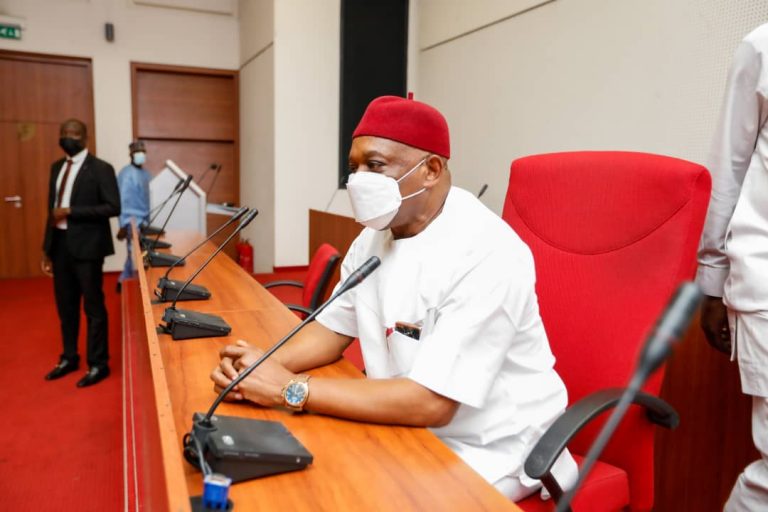 Following the video circulating the media to stigmatize the Chief Whip of the Senate, Dr Orji Uzor Kalu, a group, Southeast Political Youth Forum has condemned this act in all totality.

In this video, Dr Orji Uzor Kalu, identified that Biafra struggle is a structural fight that only God has the final say

Dr Orji Kalu also stated that politicians are the ones arm twisting the good intentions of Biafra struggle.

Also In this video, Dr Orji Kalu said that Nigeria must be restructured as he called for the immediate implementation of the 2014 constitutional confab report, as he also solicited for the creation of additional states for the South East, to bring the region closer to equity.

Rather than see the good objectives of this interview, political blackmailers, turned the words of Dr Orji Kalu upside-down, all for their selfish political interest.

In a statement signed and sent to newsmen, by the publicity secretary of the Southeast Youth Political forum, the group condemn any form of propaganda by any politicians to thwart the unity of the people from the southeast region as the statement read in parts;

“Our attention has been drawn to a video circulating the media space by one unknown Chi, in an attempt to tarnish the image of the Chief Whip and senator representing Abia North senatorial district, Dr. Orji Uzor Kalu, to be against his people.

“We the Southeast Youth Political Forum, unanimously and equivocally stand against such circulating video, as the defamers, are directly portraying the contents of the circulating video, where Dr Orji Uzor Kalu stressed on the need for politicians to stop using the actualization of Biafra to attain political gains.

“History has on records, the fight between the Nigeria government and Biafra in the 60’s, it was massive how our land was desecrated, our people died, killed by the Nigerian soldiers. Those alive, that witnessed the war can attest to the facts that war wasn’t the only means to achieving the states of Biafra.

“Owing to these facts, at the inception of democracy in 1999, it was preeminently decided by our leaders, those that fought the Biafra war, most especially, our warlord, Gen. Odimegwu Ojukwu, to look for other civilized approaches of making life meaningful for the southeast region by fighting our inclusiveness into the running and leadership of Nigeria, hence the All Progressive Grand Aliance (APGA), became a platform that the Late General Ojukwu flagged, for the Nigeria presidency.

“With this move by Ikemba, the ideology to make life worth living for the southeast region, became a template to Igbo leaders, in avoidance of the consuming conflicts that stood to retard the growth of the southeast states.

“Subsequently, the quest to secede from Nigeria grew from the MASSOB into the IPOB, with much damage recently to the land, at the end, achieving nothing. How well shall we continue to destroy our land? no good leader from the southeast, should be silent on the destruction and hardships brought to the land against the request of our warlord, Gen. Odimegwu Ojukwu’s sue, for peaceful coexistence, towards healing the land through the use of our collective resources from the Federal government to alleviate our region.

“We can’t get hold on history, how Nigerians destroyed the nation in conflict with the British, before independence was given for our freedom. Neither could we tell how physical the combat was, in destructions, that led to our independence. However, we have on records, how our fore fathers diplomatically fought for our independence. It was an independence movement, led to the country, with persistence, it was granted, of which we still have, into our tomorrow.

“We, the members of the southeast political youth forum are dissatisfied in totality with anyone trying to use IPOB or any other southeastern group against Senator Orji Uzor Kalu. It is in public spaces already, how IPOB of recent had lamented of how hoodlums are committing crimes, using the name IPOB for disguise. What are your thoughts about those hoodlums? Should we allow them destroy our land or the name IPOB?

“This infiltration of criminals, using the name of Biafra to operate has made the movement unholy, before any judgement. This was also what came to play in the #End SARS agitations that saw bad intentions minded Nigerians, infiltrate the true course of the Nigerian youths against the federal government in the total removal of SARS. What happened at the end? The main actor’s had to distance themselves from the struggles because it was becoming unholy a course.

“People like Dr Orji Uzor Kalu has never for once neglected the call by Gen. Odimegwu Ojukwu towards seeking other civilized ways of balancing the marginalization of the southeastern region, by keying into the Federal government to rebuilding our Southeastern region.

“We acknowledge the struggles of IPOB, fighting for Biafra nation does not mean other southeasterners can not bring to their people, the dividends of the Federal Republic of Nigeria. So long as we still use the ‘Naira’ and also abide by the ‘constitution’ of the federal Republic of Nigeria, it would be greater evil against our land, to deny the southeasterner their rights,in the sovereignty of Nigeria, hence, we all die before the actualization of the set goals for Biafra land or end up diminished before our co-owners of the dividends of Nigeria.

“We want to, through this medium, warn political underdogs, which we believe are not necessarily from the southeast region, to desist from scandalizing the name of Dr Orji Uzor Kalu or any other eastern leaders, whom, as at different instances shown their commitments towards the growth of the Southeast region.

“Moreover, we call on those politicians thinking they’re more acquainted with the actualization of Biafra, to lay down their offices, elective or appointments with the Federal Republic of Nigeria, to prove their 100% commitments into the fight for the sovereign states of Biafra.

“Dr Orji Uzor Kalu and many other good politicians from the Southeast have often reiterate their commitments towards bringing to the southeast, all they can lay hands on, through the apparatus of government, towards balancing the equal rights of the southeast with the Federal government.

“We call on all Nigerians, most especially ‘Ndi Igbo’ to disregard the portraits, painted by this Unknown Chi, whom we believe is used by political underdogs from other regions of the nation, to tarnish the image of the Chief Whip of the 9th Senate, Dr Orji Uzor Kalu, against the 2023 general elections”. The statements concluded.