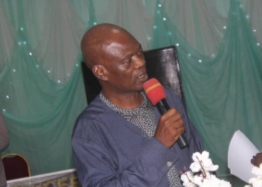 Media Relations Consultant, Chief Dr. Fidel Onyeneke has appealed to Imo people to rally round the government of Senator Hope Uzodinma, irrespective of political inclinations and differences, in the interest of peace, unity and development of the State.

Chief Onyeneke made the appeal in Owerri, on Saturday, while speaking to Journalists after attending the Imo state stakeholders’ meeting.

He said that what should be paramount in the minds of the people was a peaceful coexistence and infrastructural growth of Imo rather than issues that would divide the indigenes across sentimental lines.

Chief Onyeneke who is a former State Chairman of Nigeria Union of Journalists(NUJ), called for patience and understanding as the state government makes frantic efforts to improve the welfare and living standard of the masses.

Meanwhile, he commended Governor Uzodinma for holding the shareholders’ meeting which, according to him, created the opportunity for veritable information flow between the Government and the governed.

Speaking, he said: “It is very crucial to interact regularly with people as effective communication builds strong relationship and confidence in the government.”

Furthermore, he expressed satisfaction with the giant stride already recorded by the government in the areas of road rehabilitation, provision of traffic light, reforms in the Civil and Public services, as well as youth empowerment, among others.

He, however, charged the state government to intensify efforts to restore the lost dignity of civil servants in the state.

Also, Chief Onyeneke advised Imo people not to hesitate in volunteering professional services and advice that would security and accelerated boost in all sectors of human development in the state.

The profound Media Consultant also advised the government to remain open in order to accept genuine contributions aimed at enhancing the status of Imo state.

Onyeneke, therefore, reminded the masses that Imo was bigger than everybody, noting that, “and as such, all hands must be on deck to make the state the envy of this especially as we have no other state to call ours except Imo”, he insisted.