The people of Ikwuano LGA of Abia State and Abians in general have been advised to desist from all manners of rancorous politics and embrace strides geared towards development.

Barr. Onyekachi Monday Ubani, a stalwart of the All Progressives Congress (APC), expressed acrimony towards the venomous words rained on individuals for leaving a political party.

Barr. Ubani, speaking at his Awomukwu country home in Ikwuano LGA of the state, weekend, advised the people that developing their environments should form the basis of their interest and not party.

The Lagos based Legal practitioner, reiterated that the people of Ikwuano and indeed Abians should be more interested in attracting meaningful developmental projects than playing politics of hatred.

This is following the various resentful statements spewed out by the PDP members on the Member Respresenting Ikwuano/Umuahia Federal Constituency, Hon. Sam Onuigbo upon aligning with the ruling party, APC.

To this effect, the illustrious son of Ikwuano advised his people and the entire Abians not to deviate from their goal, hence developing the immediate community and the state.

The Human Rights Activist who condemned totally the spontaneous hatred that springs on the minds of party faithfuls upon loosing a member to a sister party, lamented that such deters growth and development.

“I just want to let them know that it’s not about party, it’s about interest, it’s about development. The moment we have development in mind, your brother can be in another party and he’s developing the environment. This issue of you automatically becoming enemies simply because you are in another political party should be done away with. 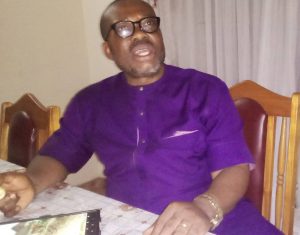 “If you belong to a it different party, they won’t befriend you, they won’t attend your meeting or events. This is very common in Abia state but worst in Ikwuano. But, for some of us who have been liberated and are liberally minded, we don’t care where you belong. If you belong to a different political party and you feel that you can bring development to my community, I’ll support you. It’s all about capacity and not about party or individual and I can never hate any man because he belongs to any political party.

“The water that I sank in my community and is running is for anyone that comes, my palliative that I gave, I instructed them not to talk about political party, give it to all the people that are from Awomukwu, that is the way I do my own thing.

Asked his relationship with the Legislator prior to his defection to APC, he said:

“I didn’t know Sam Onuigbo before, I only knew him then as a representative of Ikwuano Umuahia but never had a one-to-one relationship with him. But, since he joined the APC, he, as a humble man paid me a visit and I also was humbled by that particular gesture and I feel very honoured.

“And that’s my central idea of what people should be in government for. And I’m not one who is so party conscious that even when their party is erring they cannot call the leadership to order. So, it’s not about party, it’s about doing the right thing. If my APC is doing the right thing, I’ll commend them and if PDP is doing the right thing I’ll also support them. But, what I need basically is development for my community, for Ikwuano and the state and then Nigeria. That’s more central to me than these issues party people always emphasise.

“It’s not a question of party affiliation it’s about who is going to develop Ikwuano? I need this road from Awomukwu to Nkalu in Akwa-Ibom and whoever puts it for me in Budget is my brother, or my sister.

He, therefore, used the medium to advise the people of Ikwuano and Abia to refrain from attacking Onuigbo over his new found love.

He said: “please, they should not kick at him because he has a right of choice in the first place. Secondly, he’s a man and if he feels that’s where his interest can be protected because it’s about interest. So, if that’ll enable him bring development to Ikwuano and Abia, nobody should fight him.
And which was what I told him that we need to ensure that we bring development to Ikwuano and Abia.

It will be recalled that the Rep. Sam Onuigbo had last week, paid a courtesy call to the Human Rights Activist Monday Ubani in his hometown, Awomukwu.

Famous Reporters was gathered that the Lawmaker who arrived in company of many notable dignitaries thanked Ubani for his wide-spread contribution in nation building, especially in the justice sector. He commended Ubani for making Ikwuano proud.

Furthermore, Rep. Onuigbo had, during his visit, intimated the legal inspirator that he had formal embraced the ruling party, the APC.

According to him, his decision to part ways with the central party in the state, the PDP, was in his burning desire to attract more dividends of democracy to his constituents.

Speaking in a related development, the proud son of Ikwuano debunked the impression which has over the years, attributed the entire state to as PDP reseurved area.

He, however, admitted that the state had over the years been under the influence of the PDP but without fear or favour, declared an outright end to the perceived norm.

Hear him: “Of course, PDP has dominated Abia politics but it’s no longer going to be the same again. We have done PDP for over 20years and there’s nothing to show for it.

China says WHO coronavirus experts to visit from Thursday

#OndoDecides: Maintain your all-inclusive and participatory approach of...

We Are Proud Of You, Solidly Behind You,...