Africa’s worst virus-hit country has yet to begin vaccinating its population against Covid-19, stirring criticism over slow procurement and lack of strategy.

A first shipment of AstraZeneca/Oxford jabs produced in India is due to arrive on Monday, with injections expected to start two weeks later.

Health Minister Zweli Mkhize told The Sunday Times that 20 million additional vaccines had been ordered from US drugmaker Pfizer. 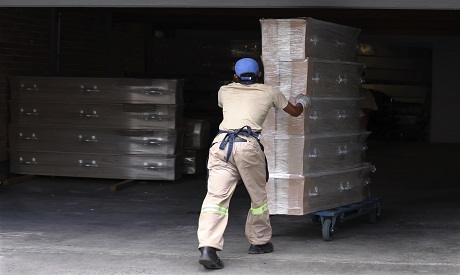 Workers unload coffins from a delivery truck for sale at AVBOB’s funeral parlour in Bellville, Cape Town, South Africa, Saturday, Jan. 30, 2021. The COVID-19 pandemic has claimed the lives of more than 10,000 people in the Western Cape Province with burial space running out in the inner city and crematoriums running six days a week out of curfew hours to keep up with the demand. (AP Photo/Nardus Engelbrecht)

“These vaccines are secured and awaiting manufacturers to submit final agreements with details of delivery dates and exact amounts,” said Mkhize.

The health ministry did not respond to several AFP requests for comment.

READ MORE:  Over 4,400 held as police clamp down on protests

South Africa aims to vaccinate 67 percent of the population, or 40 million people, by the end of the year.

Some vaccines will be provided by Covax and the African Union, while others will be directly purchased from suppliers.

“We are reasonably comfortable that what we have paid for, signed for and are negotiating for will cover the numbers that we are looking to vaccinate,” Mkhize assured.

The minister added that storage of the Pfizer/BioNTech vaccine, which needs to be kept at -70 degrees Celsius, would not be an issue.

“We have some capacity, mostly in academic institutions. There are now companies coming forward with storage and transit solutions,” he said.

South Africa’s coronavirus outbreak has been accelerated by a new variant thought to be more contagious than earlier forms and relatively more resistant to existing vaccines.

To date the country has recorded more than 1.4 million infections and almost 45,000 deaths.

What you need to know about Juneteenth

You Were Elected to Serve the People— Rep....

Exit from EU will give UK better global...