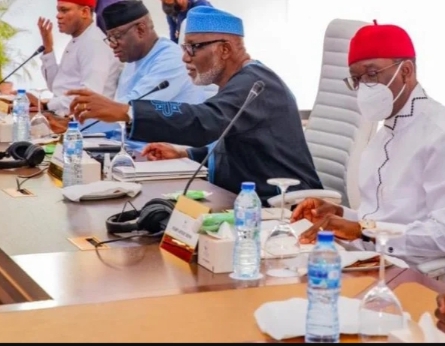 As agitations for the region that would produce the next President of Nigeria come 2023 increases, Governors of Southern states have today, Monday, during their meeting with the President, Major General Muhammadu Buhari (rtd.), insisted that the latter’s successor should come from the southern region.

This formed the basic part of the communique they issued following their meeting on Monday in Lagos.

Meanwhile, the meeting held eight weeks after the governors met in Asaba, the Delta State capital.

Among other issues deliberated on by the Governors was the present state of insecurity in the nation, the need for Constitution amendment, PIB, as well as anti-open grazing law in all member-states.

While commending lawmakers for the passage of the Petroleum Industry Bill, they opposed three per cent revenue allocation for the host communities.

Rising from the meeting, the Forum “re-affirmed their commitment to the unity of Nigeria on the pillars of equity, fairness, justice, progress and peaceful co-existence between and amongst its people.

“The Forum reiterates its commitment to the politics of equity, fairness and unanimously agrees that the presidency of Nigeria be rotated between Southern and Northern Nigeria and resolved that the next president of Nigeria should emerge from the Southern Region.”