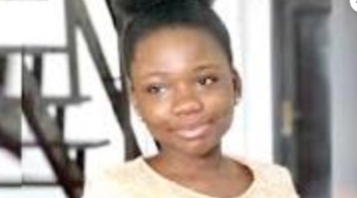 Mrs. Vihimga Akpagher says her fourteen-year-old daughter, an SS1 pupil of Premiere Academy, Lugbe in Abuja, has passed on after she was allegedly abused sexually.

She wailed that the her daughter, Karen-Happuch Akpagher died from an infection after a condom was discovered in her private parts, following a perceived sexual assault.

According to Vihimga, her late daughter had called her earlier, and complained about sickness, pleading that she should come and take her home from the school.

Although she lamented that the school had initially asked her not to bother, stating confidently that her daughter was in good health, Vihimga, however, said she had to pick the teenager from the school on June 19 after the deceased’s insistence on returning home.

She noted that on getting home, her daughter looked dreadfully ill and was taken to the hospital for treatment thereafter.

According to Vihimga, her daughter eventually died at the hospital after enduring trauma which made her slip into a coma.

The mother, in her befuddled state, alleged that several checks as conducted by the medical doctor revealed that while her urine had contained sperm, a condom was equally left in her private part.

Vihimga also claimed that the doctor revealed that the development had resulted in sepsis which eventually took her daughter’s life.

“But by the morning of Monday, June 21, 2021, I noticed that her condition had deteriorated and took her to hospital, and while examining her, the doctor saw a discharge, ran a test, and discovered that it was a condom that was left in her,” she was quoted by The Punch to have said.

“They tested her urine and it contained sperm; and like that, infection and sepsis led to her death. I picked her up on June 19 and she died on June 21. She slipped into a coma and died. She was traumatised.”

But in a statement via its Facebook page, the institution dismissed the claim that the student left the school sick, noting that she was healthy.

The boarding school also called on the public to desist from peddling unverified claims on what led to the student’s death, adding that investigation is ongoing into the matter.

“Since the demise of the pupil, there have been speculations and unfounded statements concerning her death on social media, especially on WhatsApp,” it said.

“We hereby inform the public that whatever message they have come across on social media is unfounded. As a school, we are committed to ascertaining the cause of her death because the life of every student at Premiere Academy matters.”

In a follow-up post, as per The Punch, the school said it would release a “factual and composite” statement after police conclude an investigation into the matter.

The Police, in the Federal Capital Territory (FCT), have invited the management of the Premiere Academy, located in Lugbe in respect of the untimely death of a student of the college, Miss Keren-Happuch Akpagher.

The 14-year old Senior Secondary Class 1 (SS1) student was said to have died at a private hospital in Abuja on Tuesday, 22 June, 2021.

The Acting Principal of the college, Mr Chris Akinsowon who disclosed this while briefing journalists on the incident in Abuja on Friday said the school had also commenced an internal investigation on the circumstances surrounding her death.

“No stone will be left unturned in our quest to get to the root of this matter as a School and parents to find out the real cause of the unfortunate demise of our dear daughter and further forestall such incident in the future”, he said.

“As an institution, the safety and security of our students are most paramount to us including their protection against sexual assaults of any type and kind in our school.

“In the light of this incident, we have honoured the invitation from the Nigerian Police investigating the case surrounding her death, where we cooperated with them and stated our commitment in assisting them in their quest to unravel the controversies,” he added.

There have been controversies surrounding the student’s death. While some are alleging foul play, the school management said the late student had an underlying illness prior to her admission into the school.

Matron of the school’s clinic, Grace Alamin disclosed during the briefing that the late student was suffering from type 1 diabetes, which was being properly managed in the school until she was taken home penultimate weekend by her mother.

Recalling the circumstances that played before the student’s death Akinsowon said, “Keren Akpagher, reported to the School Clinic on 17 June, 2021 with a complaint of redness of the eye. Her mother requested that she be taken to see an ophthalmologist on Saturday, 19 June, 2021. She was taken for the appointment in the morning of the same day.

“On her return to the school, her mother further requested to take her home because Keren was insisting on going home for that weekend. An exeat was granted and she was released to her mother on Saturday afternoon in a stable condition.

“The school only got to know about her hospitalisation in the morning of Monday, 21 June, 2021. We mobilised immediately and paid her a visit at the hospital on that day. It was with deep sympathy that we later heard of her demise early the next day, Tuesday, 22 June, 2021.

“The school did not refuse to grant the mother of the deceased custody of the sick daughter at any point.

“On the issue of her release to the mother at the ophthalmologist’s clinic where she requested for her, the official of the school (nurse), who accompanied the student could not release her to the mother at the hospital because the due procedure for releasing a student had not been completed. After they got to the school, an exeat was processed and she was released to her mother.

“Since the demise, the school has visited the family several times – 15 management officers on the day of her death, delivered a condolence letter on the second day.

“While we appreciate the sensitivity of the issues at the moment, we appeal for restraint on the part of the media, at this time we are all grieving, from sharing unconfirmed information that could jeopardise the case and cause further harm to the family of our dear student. It also jeopardises the effort of the law enforcement agencies towards solving the case.

“It is a sad moment for us as we continue to mourn our late dear student, classmate, schoolmate and friend that just passed.

“As an institution whose objective is to make every child who passes through this high school to become an effective communicator, a critical thinker, an independent learner, an achiever, an ethical individual and a world-class citizen, and for the fact that the life of our dear student has been lost, we deemed it fit to provide clarity to a number of misinformation across the media space.”