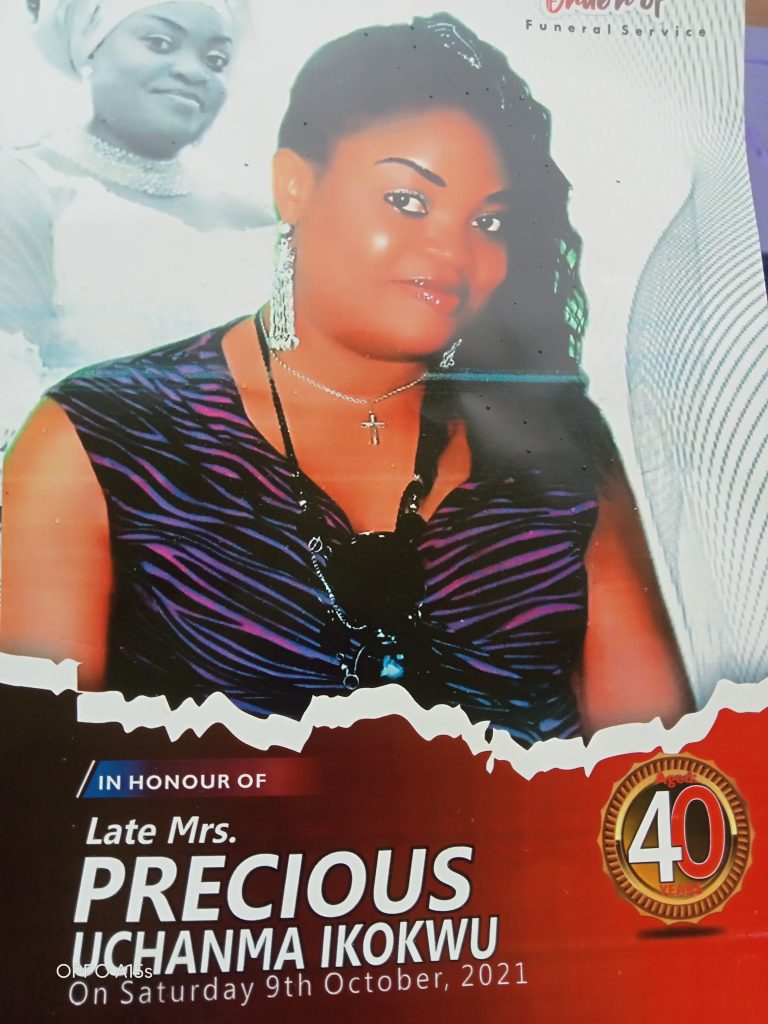 The remains of the body of late Mrs. Precious Uchama Ikokwu, the wife of Punch Reporter in Abia State, Mr. Ogbonnaya Ikokwu were laid to rest at her husband’s country home, Itutu, in Arochukwu, LGA of Abia State.

Speaking about the deceased, Mr. Emeka Kalu, who could not hide his agony, described the Mrs. Ikokwu whose death occurred on August 20,a month after child birth, at age 40, as a woman with a golden heart, but lamented that her demise had left the entire family in utter melancholy.

Also, a member of the Mr. Ikokwu’s family described late Mrs. Ikokwu as a worthy woman who would be greatly missed by the entire family and all who had once had a dealing with her.

According to him, late Mrs. Ikokwu lived a good and upright life during her days of existence, as he prayed God to grant her soul eternal rest, while urging the living to emulate her legacy.

READ MORE:  16 friends test positive for coronavirus after an outing

In his sermon, Pst. Sam Ezeaku of Chris Embassy, Umuahia, taking his teaching from Romans 8:1, regretted that sin of disobedience brought about death to the world.

“By one, sin entered the word and death entered into man. Everyone became subject to death as a result of a man’s sin, saying that the death appointment was activated at the garden of Eden.”

He wailed that the death that was introduced into the world by the sin of Adam was made manifest in the life of man and all other living things.

Pst. Ezeaku further recounted that the earth became cursed as a result of the sin of Adam and Eve during their days in Eden.

He said: “When death is at work in you it limits your success and progress, but stressed that the death of Jesus Christ brought an end to the manipulation of sin

“We feel her absence; our eyes are teary but we take solace in God’s word.”

“The Law of the spirit of life in Christ Jesus does not deny the existence of the Law of sin and Death because it rules over it. The Law of death exists but is subject to the Law of Christ.”