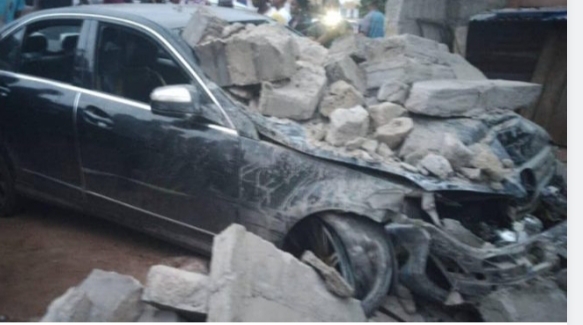 Pandemonium erupted today, among residents of Asaba, the capital of Delta State, as Police officers allegedly shot dead a middle-aged man, suspected to be a member of an armed robbery gang that operated in the area.

Reportedly, the police officers had mistaken five occupants of a certain vehicle for criminals, as they regrettably pursued after same with a view to apprehending them.

According to eyewitnesses, the vehicle collided with a fence, with the bricks collapsing on its bonnet and windscreen.

Meanwhile, the sources disclosed that the officers aimed at the tyre of the vehicle to demobilise it,

Meanwhile, the sources said, the officers who had already aimed at the tyre of the vehicle so as to demobilise same, hence the punctured tyre had prompted the vehicle to run out of the road.

The sources added that, “the vehicle screeched to a halt, with three of its occupants escaping, while the other two surrendered to the police.”

The police were said to have allegedly shot one of them at close range before arresting the second one.

Sources further explained that the deceased was not armed when he was allegedly gunned down, adding that “nothing was found on him when his lifeless body was searched.”

But acting Public Relations Officer of Delta State Police Command DSP Bright Edafe said the occupants of the vehicle were suspects who had just operated in another part of the town.

‘We had an intelligence report that they had just finished an operation and were moving towards DLA road.

‘So our men mounted surveillance, and when the officers saw the car, they flagged it down but they refused to stop.

‘As such, our men chased them to the point where their vehicle hit the fence. They opened fire on the officers who responded, and in the process, three of them escaped while one was shot.

‘One suspect was arrested while a locally-made gun was recovered,’ Edafe said.

Regardless, a human rights activist, Mr Victor Ojei of Young Nigerian Rights Organisation, described the incident as another case of extra-judicial killing and called for proper investigation.

‘This action must be investigated, this is an extrajudicial killing of a very young boy who has a bright future.

‘We have the Administration of Criminal Justice Act protects the criminals or the accused.

‘We as Nigerian citizens have a right to life, nobody has the right to take anybody’s life. These policemen need to be investigated,’ Ojei thundered.