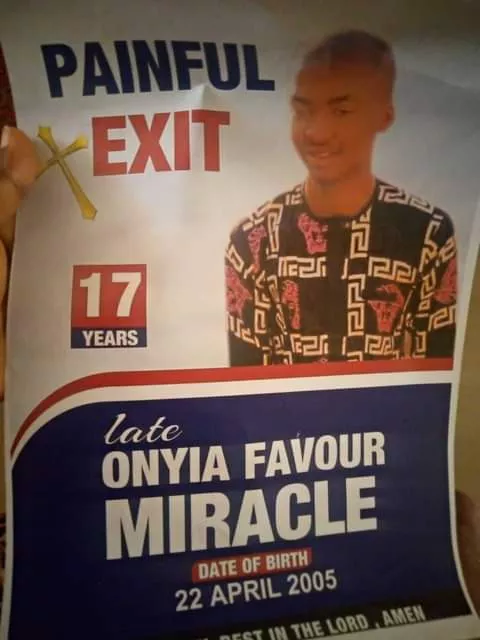 A 17-year-old son of an RCCG pastor, Onyia Favour Miracle was among three persons killed by terrorists in Kaduna state.

It was also gathered that the terorists after collecting over N2m and three new Bazaj Motorcycles amounting to N800,000 as ransom, released 21 out of 26 kidnapped residents of Ungwan Bulus in Chikun Local Government Area of Kaduna State.

The terrorists demanded for N20m ransom and while families, relatives of the victims and members of the community were rallying around for money, they killed three hostages threatening to murder others.

However, the entire community came together, contributed over N2m, three motorcycles and gave the bandits before they released 21 of the hostages.

The 17-year-old hostage killed has been identified as Onyia Favour Miracle. He was kidnapped alongside his father, pastor Amaechi Donatus Onyia, mother and two siblings.

READ MORE:  Father hands his teenage son to police for killing his girlfriend

According to a family member, Celine Chizoba John, the teenager told the bandits to kill him and spare his father so that he would take care of his siblings.

Favour was laid to rest on Wednesday, May 4.

Meanwhile, one of the released victims, Mrs. Kubwai Paul, who was kidnapped alongside three of her children, told Daily Post that one of her sons, also 17, was among those killed while in captivity.

Mrs. Paul, while narrating her experience said on the day they were taken away, the kidnappers first, demanded that she gave them her four year old baby for a blood ritual.

“As we were led into the bush, with my youngest son, they said I should give him to them to suck his blood. When I heard this, I went into prayers, calling on God to intervene,” she said.

She said while in the kidnappers’ den, the terrorists came and selected three of the persons snatched from Angwan Bulus, including her 17 years old, saying they were sending them to rest.

”While we were sitting, they just came and asked where are the Sabon Tasha people, asking for families that are more in number, from where they selected one each. One of those chosen was 17, mine was 17 and another man selling drugs.

“They said they were taking them home since our people refused to pay. When they came back, they said they have killed them,” she said

According to her, their captors warned them not to cry on hearing the news of the death of the three.

“You dare not cry even if they kill someone, anything you do without their permission, they will shoot or flog you,” she said.

She narrated that while in the forest, the abductors provided them with food, though tasteless and led them to a nearby river daily to take bath.

On the day of their release, she could not exactly tell what happened, but only recalled how kidnappers gave them transport money and they later found themselves at a village along the Kaduna-Abuja highway, around Rijana.