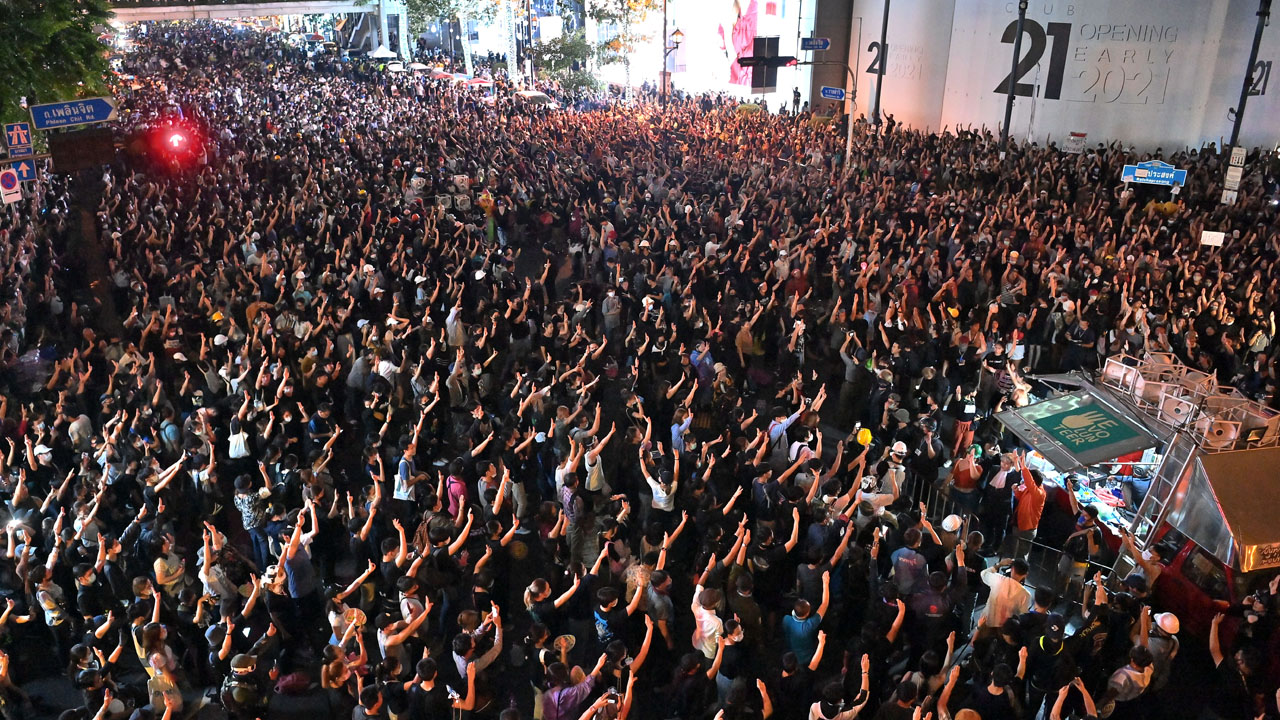 Pro-democracy protesters hold up the three-finger salute during an anti-government rally in Bangkok on November 18, 2020. (Photo by Mladen ANTONOV / AFP)

Thousands of democracy activists gathered in downtown Bangkok Wednesday for a second day of protest, after six people were shot during violent clashes, as lawmakers voted on possible constitutional reforms.

Thailand has been rocked by months of protests demanding changes to the constitution, the removal of Prime Minister Prayut Chan-O-Cha — and even changes to the untouchable monarchy.

But Tuesday saw the most violent confrontations since the movement began in July, as police used tear gas and irritant-laced water cannon on protesters trying to reach parliament, and democracy activists clashed with royalists.

More than 50 people were injured, six of them with gunshot wounds, according to medical officials, though it is not clear who was responsible for the shooting.

Protesters gathered on Wednesday at the Ratchaprasong junction in Bangkok’s shopping and commercial heart, after their leaders vowed to step up the movement.

Police used dumper trucks, concrete blocks and razor wire to barricade their nearby national headquarters, while many protesters came equipped with helmets, goggles and gas masks.

“We will protect our people. We don’t want any violence but there will be no compromise until they meet our demands,” protester Jay, 26, told AFP.

National police spokesman Yingyos Thepjamnong warned protesters not to encroach on the HQ, saying more than 2,000 officers had been deployed.

‘Keep fighting’
Prime Minister Prayut has urged protesters to refrain from violence but ruled out introducing another emergency decree — like the one banning public gatherings of more than four people which spanned a week in October.

But there is little sign the demonstrators are prepared to back down. Late Tuesday prominent student leader Parit “Penguin” Chiwarak said a “new era” in the movement had begun.

“We should not be afraid — this is just a transitional moment in our history,” Sirapop Poompuengpoot, another student leader, told the gathering crowd Wednesday.

“People are working for us in parliament and the rest is up to us: keep fighting.”

More than 50 people were injured, mostly by tear gas, according to an ambulance and medical coordination service, which said six people were shot.

Police say they did not fire either live rounds or rubber bullets on Tuesday, and they are investigating who was behind the shootings, which happened about 300 metres (yards) from the main protest zone near parliament.

READ MORE:  'Did you cough at me?' Virus row on Sydney train

The wounded included one royalist supporter shot in the hip and a pro-democracy protester hit in the leg, police said.

“The rest of shooting victims are still under investigation, but the fact was both sides were shot and wounded,” Bangkok police deputy commissioner Piya Tavichai told reporters Wednesday.

The Thai Human Rights Lawyers Association slammed police tactics, saying they were “not in accordance with international procedure to disperse demonstrations”.

Challenge to monarchy
The protests have seen calls from some for reform to the monarchy — until recently an unthinkable demand in a country where the king and his family are protected by some of the world’s toughest royal defamation laws.

King Maha Vajiralongkorn sits at the apex of Thai power, supported by the military and the kingdom’s billionaire clans, and the royal family enjoys support from mostly older conservatives.

Lawmakers have this week been discussing various proposals for constitutional change, which mostly exclude any reform to the monarchy.

One proposal seeks to replace the military-appointed Senate with directly elected representatives.

It was Senate support that allowed Prayut to hold on to power after last year’s election.

Parliament began voting Wednesday on which amendments are to be debated further.

China says WHO coronavirus experts to visit from...

WHO chief and Taiwan in row over ‘racist’...

Nigeria: A History Of Serial Genocide And The...