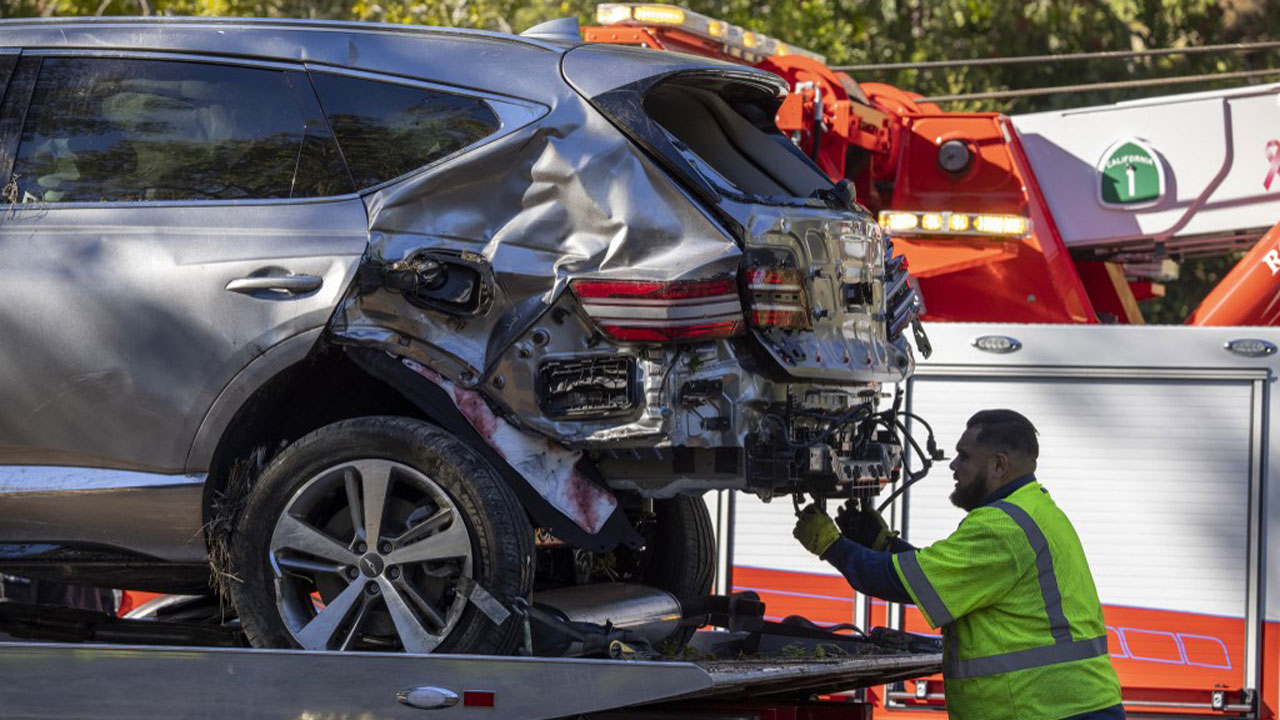 ROLLING HILLS ESTATES, CA – FEBRUARY 23: A tow truck operator secures the car that golf legend Tiger Woods was driving when seriously injured in a rollover accident on February 23, 2021 in Rolling Hills Estates, California. Rescuers used hydraulic rescue tools to extricate him from the car where he reportedly sustained major leg injuries. Law enforcement reports that there was no evidence of impairment. He was in town to participate in The Genesis Invitational golf tournament. David McNew/Getty Images/AFP/ DAVID MCNEW / GETTY IMAGES NORTH AMERICA / Getty Images via AFP

Tiger Woods suffered serious injuries to both legs as his car flew off the road Tuesday near Los Angeles in a crash he was “very fortunate” to survive, law enforcement officials who found the US golf legend said.

Woods did not appear to be under the influence of drugs or alcohol during the early-morning incident, and underwent surgery after the roll-over collision, said Los Angeles County Sheriff Alex Villanueva.

No other vehicles or passengers were involved in the crash which occurred on a steep stretch of road known as a “hotspot” for high-speed accidents in recent years.

“I will say that it’s very fortunate that Mr. Woods was able to come out of this alive,” said deputy Carlos Gonzalez, the first law enforcement official to arrive on scene.

Gonzalez found Woods trapped in his vehicle but conscious, appearing “calm and lucid” and able to identify himself.

“It is my understanding that he had serious injuries to both legs,” said Los Angeles County fire chief Daryl Osby.

Firefighters and paramedics extricated Woods from the wreckage of his SUV and transported him with a neck collar and backboard to a local hospital via road, where he underwent surgery.

There was “no evidence of impairment at this time” including any influence of narcotics, mediciation or alcohol, said Villanueva, adding that the crash remained “subject to investigation.”

He added that no blood was drawn at the scene of the crash because the sheriff’s office does not have that capability.

Woods, one of the most successful golfers of all time, has won 15 major golf championships.

He recently underwent his fifth back surgery, and said he was uncertain if he will be able to play at the upcoming Masters, which he last won in 2019.

Woods, 45, was in the area for his annual Genesis Invitational golf tournament at the Riviera Country Club, and was driving a courtesy car on the morning of the crash.

“We are awaiting further information when he comes out of surgery. On behalf of the PGA Tour and our players, Tiger is in our prayers and will have our full support as he recovers,” PGA Tour commissioner Jay Monahan said in a statement.

‘True champion’
The crash occurred near the hilly Palos Verdes peninsula, at the bottom of a steep stretch of road which has runaway truck ramps for vehicles that lose control going downhill, and which has become notorious for fatal accidents over the years.

“Apparently the first contact was with the center median, and from there (the car) crossed into the opposing lane of traffic, hit the curb, hit a tree, and there was several rollovers during that process,” said Villanueva, who did not provide a cause of the crash.

The car ended up on its side on a patch of grass some distance off the road, with its hood badly damaged.

News of the crash spread rapidly around the sport world and beyond, with figures inside and outside golfing swift to send their prayers and best wishes to Woods.

“Get well soon, Tiger. You are a true champion!” said former US president Donald Trump in a statement via spokesman Jason Miller.

‘Deeply concerned’
Woods was one of the most revered athletes in the world when he became engulfed in scandal in late 2009.

He smashed his car into a tree and a fire hydrant outside his luxury Florida home, sparking a series of scandalous revelations that doomed his marriage and put his game in freefall.

He later divorced from his Swedish wife Elin Nordegren, with whom he has two children, after a cascade of women came forward to say they had affairs with the golfer, making him fodder for tabloids around the world.

Woods underwent four back surgeries between 2014 and 2017.

In May 2017, Woods was arrested near his Jupiter Island home in Florida for being asleep at the wheel of his car in a traffic lane.

He said he had taken a mixture of prescription drugs and did not realize they would cause him to fall asleep.

Woods pleaded guilty to reckless driving and was hit with a fine and community service.

But he made an astonishing comeback to sensationally win the Masters in 2019, his first major title since the 2008 US Open.

He is the winner of 82 US PGA titles, level with Sam Snead for the all-time record.

In 2000-2001, while aged just 25, Woods became the first man to hold the US Open, British Open, the USPGA and the Masters titles at the same time.

Woods remains three major victories shy of the all-time record 18 won by Jack Nicklaus, but only four winners in major history have taken a title at an older age than Woods is now.

“Barbara and I just heard about Tiger’s accident, and like everyone else, we are deeply concerned,” tweeted Nicklaus.

“We want to offer him our heartfelt support and prayers at this difficult time. Please join us in wishing Tiger a successful surgery and all the best for a full recovery.”