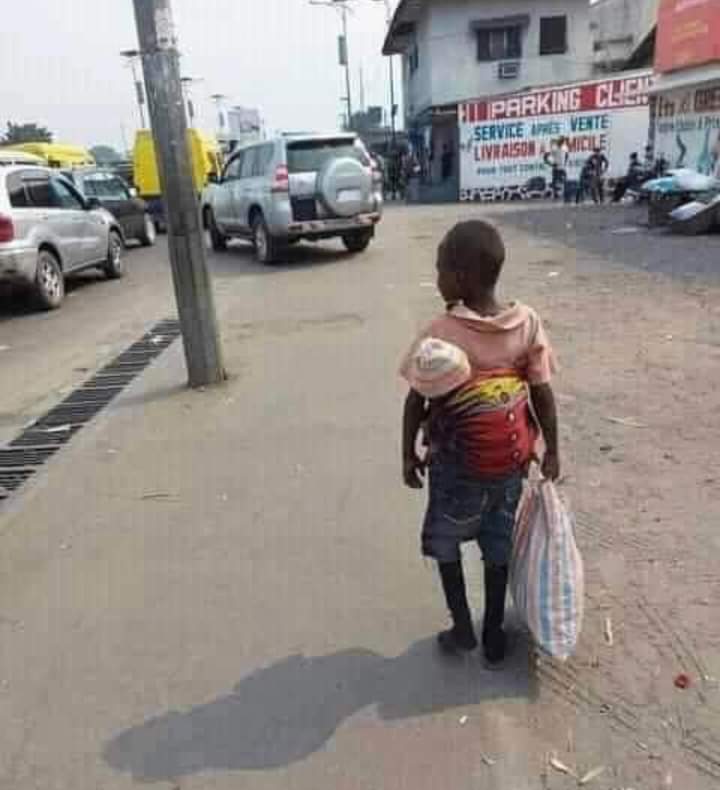 The picture of a nine (9) year old little boy who straps his eleven months-old infant brother in his back around the area, just to earn a living has caused a stir in the internet.

IsaacA Facebook handler has lamented over a disheartening treatment meted out to a poor, nine years old boy and his infant brother of 11months old by their supposed auntie.

According to the post, the said auntie to the young orphans had tagged them witch before she finally sent them parking.

They were chased by their Auntie as she calls them witches. They have been living on the street for two(2) months now and they are feeding with the help of generous people they find on the street.

They don’t have a fixed roof under their heads or where to sleep, it’s on the walking table that he sleeps with his (baby) brother. The bag in his hand is their suitcase where they put their clothes.

“ISAAC told me: THAT his father was a taxi driver that died due to lack of care and money. “His mother died from Cesarean operation while giving birth to his little brother.”

The majority of his family are in Goma, the only aunt here in Kinshasa has ended up chasing them away without a reason other than the false accusations of them being witches, that they are the ones blocking her household business and progress.

“Refusing to let go his little brother despite the suffering, ISAAC says: “if l am to die of hunger together with my little brother yes I will, but I will never abandon him”

Meanwhile, while some condemn the outburst from the assumed auntie, others tag the report as being fake, citing some related cases wherein inexistent issues of such were reported.

What is your view? Do drop your comments in our comment box.