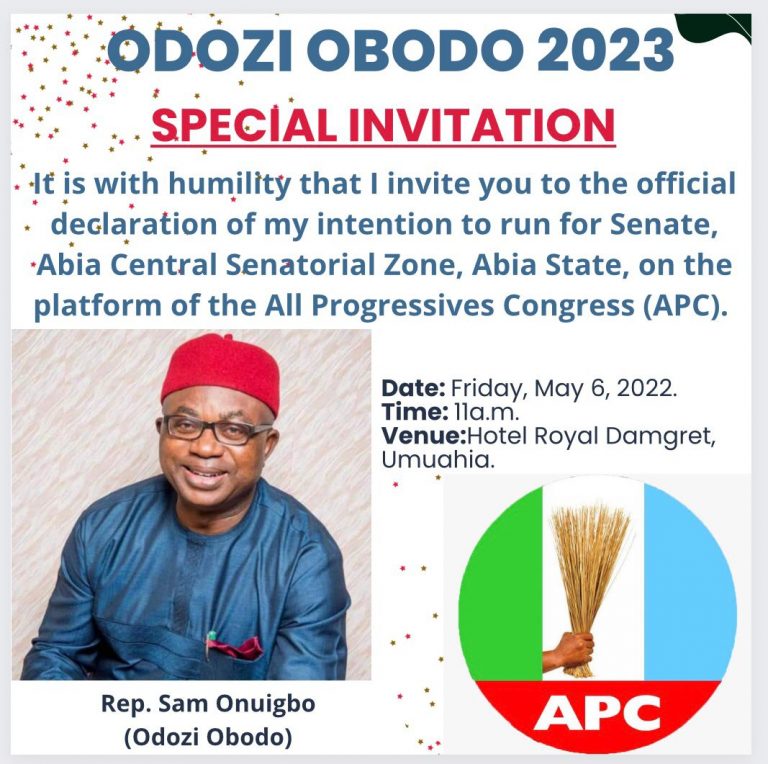 It is no longer news that Onuigbo, aka. Odozio-Obodo has overtime received both national and global awards following his remarkable and transformational contributions on the floor of the Green Chamber particularly the enviable results emanating from his Climate Change project, which is evidently noised abroad.

Although it is generally believed that the sole responsibility of the Legislator are Lawmaking and oversights, Odozio-Obodo has, through his impactful representation which centers on his acronym of “EAR”, attracted and facilitated projects in his Constituency, and at same time, restored a glimmer of hope of thousands of members of his Constituency through his empowerment programmes.

Onuigbo who has often proven himself as that ‘single tree that makes a forest’ is poised to make a difference in Abia Central Senatorial District, as well as the State, in general as he joins the race in the forthcoming 2023 general election.

This is indeed contrary to the rumours that had hovered in the air among members of the People’s Democratic Party, PDP, Abia State Chapter, as regards as why Onuigbo dumped the ruling party in the state.

Ironically, it was sang at the various nooks and crannies of the State that the indefatigable Lawmaker was itching for a third term in the Green Chamber, hence his decision to ditch the party, PDP that brought him to power.

FamousReporters.com while in a rove, gathered from both members of his Constituency and other Constituencies that Onuigbo’s eight years at the House of Representatives have been indisputably impactful, as some have, pointedly argued his ambition, whereas some have courageously urged him to take his representation which he based on the acronym of ‘EAR’, hence Effectiveness, Accountability and Responsiveness, to the Green Chamber.

READ MORE:  Orji Kalu Is A Trailblazer, He is Not Theodore Orji - Abia North Group Cries Out Over Mistaken Identity By Some Nigerians

Speaking in an exclusive interview with Famous Reporters shortly after the visit of some notable groups in the state who urged him to represent them in the Green Chamber, Onuigbo, dazed by their confessions said:

“Well, thank you for the acknowledgement based on my verifiable accomplishments, that I have done things, that are impacting meaningfully and productively on the well being of my constituents, and even beyond, because the legislation by the special Grace of God, that I have been able to put together, is something that is not only for Nigeria, but is for the global community, because is for our contribution towards reducing emissions what we call Green House emission. So, you can see that it’s not just within Ikwuano Umuahia Federal Constituency is not just within Abia state. Okay? It’s not just within Nigeria it goes beyond. So, based on this verifiable accomplishments, some of which I’ve enumerated and the interest my constituents have shown, am talking about genuine interest of coming around and telling you that we would like you to do this, we would like you to do that. So, one is encouraged totally to be able to continue to offer himself for service. And one good thing that I’m happy about is that, what I said to my people when I started consulting in 2013, that I will represent them base on acronym of ‘EAR’ and that I will attain to readefine representation, I am happy that God has helped me to be able to push this through, so that’s where we are. So, one by one by His grace we would move ahead and work according to the encouragement of my constituents.

Asked what his intentions were, he said: “By his grace I would run, because based on the encouragement which is positive and is overwhelming and absolutely motivating, because if you are working and people are saying you are working, we can see it, then it’s encouraging. In fact, the other day a group of people came from Ikwuano to come and thank me here. In fact, the one they call Ikwuano Graduates Forum, they were here to thank me about the road that is being totally reconstructed. Also, National Union of local Government Employees were also here to thank me because they it has eased their movement right now. And you have seen community that has come here to thank me about both electricity, blocks of classrooms and encourage you to do more, so I’m not going to fail them, I would go ahead and do that which they are encouraging me to do.

READ MORE:  Odozio-Obodo 2023: I Shall End Marginalization, Relegation Of LG's, Villages, Clans... Says Rep Onuigbo .... As he Declares for Senate

On what people’s anticipations of him should be, he said: “Yes, the encouragement is clear, they have encouraged me to go ahead and represent again, some are if the view to go back to the house of Reps, most of they are saying rprogram, people from other local government neighboring local government came here and benefited so they are not just saying that go to the next level, be able to represent this people they have seen what have been able to do. So, if they ask you to do that and then encouraging you genuinely not based on either, you know, some other illicit motivation, then I have a duty to move up and represent them effectively and productively.

According to Onuigbo, if elected to represent the people at the Senate, his ‘EAR’ acronym would, as well be replicated, as his vision to redefine effective representation remains aglow.

Hear him: “No, it remains ‘EAR’, the acronym remains ‘EAR’ and also I will state that I’ll always attempt to at any level I go, to redefine representation so that you move it away from the prism, like I said before, of Sky scrappers Hotel, long convoy to your ability to use the power, that people have used in tongues to give you to impact meaningfully, productively on their well being.
It doesn’t stop in the house of Rep if I move to Senate house I will still do the same”, he pledged.