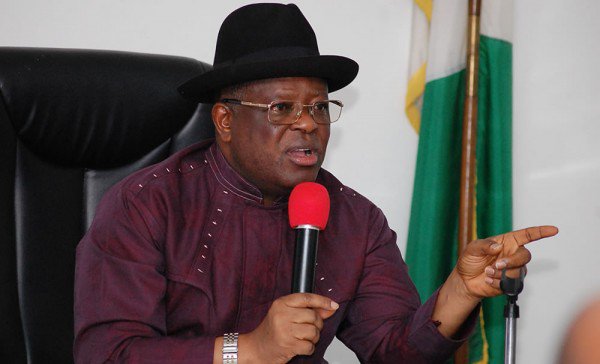 The Association of Ebonyi State Indigenes in Diaspora (AESID) has described the recent assessment of Governor Dave Umahi’s performance in the state by the founder and Director of Adoration Ministry, Enugu, Reverend Father Ejike Mbaka, as against the realities on the ground in Ebonyi State.

The Ebonyi indigenes warned that Fr. Mbaka should not be carried away by Umahi’s gift to the church, adding that the governor can not bribe God.

Governor Umahi had on Sunday, October 24, 2021, attended Fr. Mbaka’s church’s annual thanksgiving, harvest and bazaar service during which the clergy said that Ebonyi governor’s donation “is already shaking the heavens”, adding that “if you doubt it, go to Ebonyi.”

Mbaka was referring to the handing over of King David Medical School, Uburu to the Catholic Church during the recent inauguration of a new Catholic Bishop.

Reacting to the commendation of Umahi’s administration by Fr. Mbaka, through a statement on Tuesday in Abuja, AESID President, Amb. Paschal Oluchukwu, said contrary to Mbaka’s evaluation, the current administration in Ebonyi State has elevated cosmetic governance and made praise-singing a glorified art in the state.

“We have no doubt about Fr. Mbaka’s calling and all he has represented which as a group we acknowledge and appreciate but his heroic assessment of Governor Umahi’s nearly eight years reign on the saddle as Ebonyi Governor does not, we repeat does not in any way reflect the current realities of massive hunger and anthropogenic poverty created by the flyover and disco-lights-centric administration in control of the welfare of nearly four million Ebonyians.

“Apart from our misgivings that such project which Umahi has been parading as though it is a personal gift was executed with yet-to-be-accounted-for public funds, we wish to draw Fr. Mbaka’s attention to the fact that the land the so-named King David Medical School, Uburu is situated formerly belonged to the Presbyterian Church and is yet being contended even in a Court of law. More so is the fact that Umahi, except for his declaration at the Bishop’s inauguration was yet to come up with any concrete plans and terms on how he wants the institution to run and operate.

“As a respected governance and accountability group, Umahi and his government were yet to answer the many nagging posers we, like the rest of reasonable Ebonyians have raised regarding the said building and the proposed handing over of the institution to the mother church.

“But AESID asks; how can Umahi think he can bribe God after dealing terribly with the men and women God gave him the opportunity and onerous responsibility to cater for their welfare and wellbeing?

“What has Umahi donated to the war-ravaged Effium victims, many of who are yet scattered in different parts of the North and Central Senatorial zones in the state with some still sleeping under Ezzamgbo flyover without foods, clothing or shelter following the destruction of their homes by their attackers?

“What has he also donated to the crying and deprived victims of the international Airport project in Ezza north whose homes were demolished and their property forcefully taken away from them without adequate and reasonable compensations?

“What has Umahi also donated to the hundreds of poverty-tossed Ebonyians lining up on the major roads in Lagos, Abuja and Port Harcourt in daily hustles to sell Gala and soft drinks just to put foods on their table?

“What happened to the enumeration for the empowerment of such poor Ebonyians done by his government sometimes at the twilight of his administration? Or is Umahi unaware of the scripture that he who gives to the poor lends to God?

“How about the workers and retirees whose welfares, salaries, pensions, gratuities and emoluments he has completely neglected in pursuit of his greed-driven, so-called development strides? Has Umahi remembered even the hungry casual labourers he sees daily at the Abakaliki township stadium and Vanco junctions near the old Government House?” he said.

While expressing disappointment over the governor’s donation, the statement added: “It is very unreasonable for anyone to think that by merely constructing less impactful flyovers and concrete roads, Umahi is turning Ebonyi into Dubai-a 21st century world-class city that creates massive jobs and opportunities for its people.

“The clergy, Fr. Mbaka, like the rest of reasonable Ebonyians should sincerely be worried that Ebonyi still largely depends on his Enugu-based Aqua Rapha sachet water as the main source of drinkable water when water wastes in various glorified water fountains in strategic parts of the Abakaliki capital city.

“In addition, Fr. Mbaka deserves to be informed that the level of borrowings which the Umahi government has embarked upon has actually placed a heavy debt burden on the future of the young state struggling to catch up with its neighbours in terms of economic growth and per capita income.

“Borrowing to waste and lavish same on flyovers and bogus concrete road and other infrastructural jamboree projects like Umahi is currently doing in Ebonyi only spells serious doom for the future of the state and God’s servants like Mbaka should better be intimated. These and many more are the reasons we strongly believe that Mbaka must really be disconnected from the true position of things regarding the Umahi regime in Ebonyi state.”

According to the statement, with the level of insecurity that Ebonyi is faced with, it should have been a time for critical sober reflections because security and the welfare of the people remain in any part of the world, the primary purpose of a government must serve.

“The clergy, the church should, therefore, like the rest of reasonable Ebonyians should not be deceived by the miracle-shopping governor. For it is our strongest confidence that with the masses, our dear state shall yet reclaim its glory that is now fading away in cosmetic and flyover governance!”