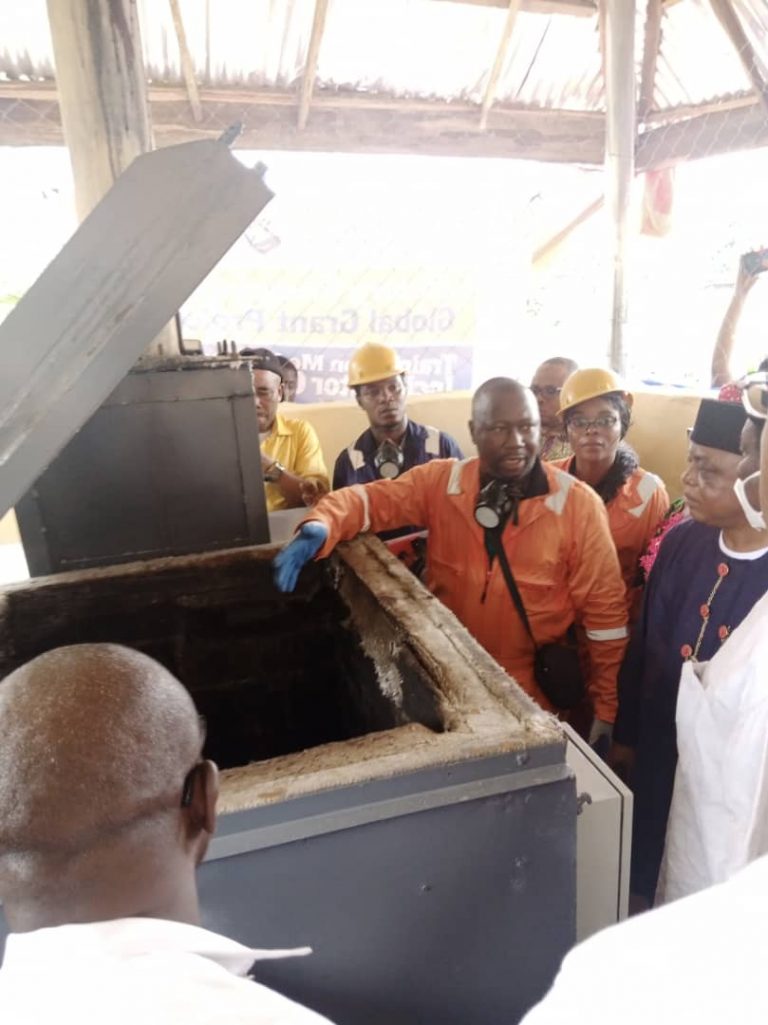 In her quest to ensure a robust environmental health safety of residents of Aba, the commercial bane of Abia State, the Rotary Club of Umungasi Aba District 9142 has disclosed her readiness to Inaugurate a ‘New Environmental Regime in the city.

In his address, Prof Chigbu, amidst euphoria, described the modern Medical Waste Incinerator, as donated by Rotary Club of Umungasi Aba, District 9142 as a Global Grant project of the ROTARY INTERNATIONAL.

“It is a laudable initiative and the first to have existed in the College since its 1948 founding.

Speaking further, he pointed out that the automated incinerator would ensure that medical waste generated from both private and public health institutions in Aba and Abia state in general, are properly disposed of and reduced to a harmless state.

“It would help save the public from health hazards in this era of ailments like hepatitis, malaria disease and even HIV and AIDS which could be contracted in the environment if there is poor and inefficient medical waste management system.

In addition, Prof. Chigbu, an Environmental Biologist and Medical Laboratory Scientist will do all within his capacity to see that the incinerator is maintained and manned always. I am glad to announce to you that right now, the College already has a crew on hand to operate the machine and I am urging the hospital Proprietors in Aba to feel free to come to the College and dispose of their medical waste.”

Corroborating, the first female president of the Club, Mrs. Ngozi Ekere, has this to say: “the initiative followed an all-important needs assessment embarked upon by the Club and was also a brainchild of Rtn. Obieze Adimuko who was a former State Primary Healthcare Board member at the time of intiating the Project.

“To me, the project will go a long way in taking care of waste emanating from medical sector like needles, syringes and medical bottles.”

Mrs. Ekere eulogised Rtn.Azubuike Akamnonu whom for the paperwork of the laudable project, as well as other members of the Club, who she noted, “supported the project from its get-go. And I also want to commend the Rotary E-Club of Greater Sydney, Australia the collaborator and partner for the funding of the landmark project”, she added.

Also speaking, Rtn.Dr.Okey Okonkwo DG 9142, thanked Abia state governor, Dr. Okezie Victor Ikpeazu who was represented at the event by the Commissioner for Health, while urging the latter to implore the former to increase his support for the Club saying that if the governor who is “a major Donor Level 2 member of the Club” (one who has donated over $25,000 to the Club) increases his support, Rotary Club would do more.”

Furthermore, he used the medium to thanked the governor for delivering the dividends of democracy to Abians, citing ongoing and completed road projects and infrastructures still going on under the governor’s watch.

Moreso, he opined that asides” needs assessment, the project, which is a groundbreaking initiative, followed due diligence and procurement process and would be sustained by the Club so that syringes, glass vials, sharps and even tourniquets coming from hospitals as waste are neutralised”.

Meanwhile, highlights of the ceremony which is a joint project between Rotary Club of Umungasi Aba, District 9142 and Rotary E- Club of Greater Sydney Australia, were Rotary Club convivial songs, presentations.

In his remarks, while commissioning the project, the commissioner for health, Dr. Joe Osuji who represented the Governor, expressed delight and thanked Rotary Club of Umungasi Aba District 9142 for leading the humanitarian pack.

He urged people of goodwill and all public-spirited persons in Abia State to tag along the initiative, as he affirmed that the project was in tandem with the adminstration of His Excellency, Governor Okezie Victor Ikpeazu Ph.D, whose ultimate goal, he emphasised, “is to see that Aba and Abia State in general is restored to its environmental glory as one of the best-planned cities and states in the federation.”

According to the commissioner, the Medical Waste Incinerator is “a succour” to the city as another incinerator had been installed in Umuahia, state capital, at Hospital Management Board by Niger Delta Development Commission, NDDC.

He thanked the Club and pledged sustainability on their part saying, “when such projects are installed more in the state chances are that all toxic and harmful substances in the form of medical waste causing health disaster among residents and citizens of the state would be reduced to the barest minimum.”

The College’s Registrar, Elder Ibendiogwu B. O. assured that the College would manage adequately the project, as he thanked the stakeholders of the project.

Addressing Newsmen, Engr. Kingsley Ugochukwu, the Project’s Lead Engineer explained that “all components of the machine were locally sourced barring the burner.”
Adding, he said, “the diesel-powered machine is in tandem with the idea of local content as it was locally fabricated and assembled by an indigenous technology and a made-in-Nigeria novelty.”

In addition, Barr. Chibuike Nwokeukwu (SAN) expressed optimism that the project would be sustained by his forthcoming administration.

The legal practitioner went further to express his indebtedness towards ensuring that he makes either better the record set by the Ngozi Ekere-led administration “at most or maintain the status quo, at least”, he pledged.

In his views, Comrade Nelson Nnanna Nwafor, Executive Director,
Foundation for Environmental Rights Advocacy and Development, FENRAD, has this to say;

“Given the indiscriminate dumping and disposal of biomedical waste in Aba, FENRAD believes that one may well agree with Mrs. Ngozi Ekere that for the installation of the incinerator or waste burner at the College a new environmental regime has begun in Abia state to manage Health medical waste”, he said.

Umahi, NGO Set To revitalize all the collapsed general hospitals in Ebonyi