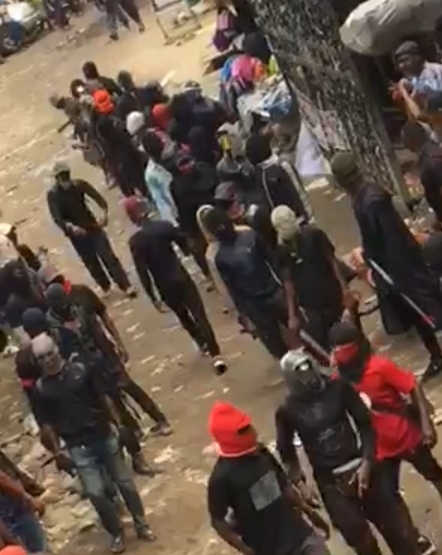 Anambra State Governor, Charles Soludo has exonerated Fulani herdsmen and Nigerians from other regions from involvement in the rising insecurity in the South-East region of the country.

Governor Soludo who debunked vehemently reports that perpetrators of criminalities in Anambra are invaders, alleged that all the “unknown Gunmen” as apprehended in Anambra and the entire South-Eas region are from the Igbo extraction, and not criminals from orher region .

The governor, stated this on Sunday during an interview on Channels TV’s Politics Today, insisting Anambra people are helping security agents with the identities of the ‘unknown gunmen’ ravaging the state.

Soludo said the suspects arrested so far “are 100 percent Igbo,” noting that some of those criminals are hiding under the agitation of the Indigenous People of Biafra (IPOB) who had constantly distanced themselves from the crime.

He said, “No space in Anambra will accommodate these criminals. Of course, they are known criminals. They come from homes, have parents, relatives and have people from the villages and so on. But thank goodness, people are now coming forward with information about their identities. And that’s how we have been picking them

“We are pursuing them vigorously. We have this lead whether this was an orchestrated or pinpoint attack and all kinds of theories as to why this happened. I can bet you, it won’t be too long before we get them. We are not relenting one minute.

“They are plain criminals. Some of these criminals also hide under the cloak of agitation but IPOB has repeatedly distanced itself from the criminals.

“They are kidnappers and plain criminals and they indulge in these because it is lucrative. Anambra is without a doubt the richest state in the South-East so this is the state where kidnapping has the highest value and so you will have their highest concentration here.

“If you have an Okada rider who goes into the bush; learns how to shoot, and joins a criminal gang after which they kidnap someone and make millions, it won’t be easy convincing such to go back to his Okada business anymore.

“But we are decimating them. They are not unknown gunmen, they are unknown to the extent that maybe are not caught immediately. But I can tell you we’ve been catching quite a lot of them and they already know that Anambra is not safe for them anymore.

“Let me be clear about it, 100 per cent of the people we have caught are Igbo. There is no hoax that somebody is invading from somewhere. It is 100 per cent Igbo on Igbo.

“Anambra receives its proportional share of an influx of Igbo from other South-East states and other parts of Nigeria. At the initial stage when we stage and the first set of people we caught are Igbo from the South-East states and not from Anambra. But as we went on, we discovered that a whole lot of the youth are joining them and we have not disguised among them, we are dealing with them equally.”

On his effort to nip insecurity in the bud, Soludo maintained that several operations are ongoing to correct the anomaly, adding that Anambra residents are now enjoying relative peace.

He said, “The 8.5 million residents in Anambra can testify to you that insecurity has come down to the barest minimum. At least, in the last three months, cases of insecurity that seem to be daily affairs have come to a halt.

“We have decimated criminal gangs and their infrastructures and I don’t think they have the capacity again to come with the kind of ferocity they have in the past.

“Anambra has been relatively peaceful recently and we are pursuing a peaceful agenda. Compared to many other places in Nigeria, I will say if we have to have the statistics in the last three months, I think Anambra will compete favorably as one of the safest comparatively.

“We are not relenting. The operations are ongoing. Many communities are now at peace and having their new yam festival celebrations and these are things that weren’t possible in the past. Millions of events are also taking place simultaneously.

“However, insecurity won’t disappear overnight. It took years for them to take root and build about 15 camps all over the 8 local governments. Their activities won’t disappear in three months. But we are not relenting, we are putting in all our efforts and we are determined to make Anambra safe and secure for the residents and businesses.”

Famousreporters.com recalls that Senator Ifeanyi Ubah had, recently escaped death after, as his convoy was attacked by yet to be identified gunmen.

However, Senator Ubah had survived in his bulletproof car was riddled with bullets.