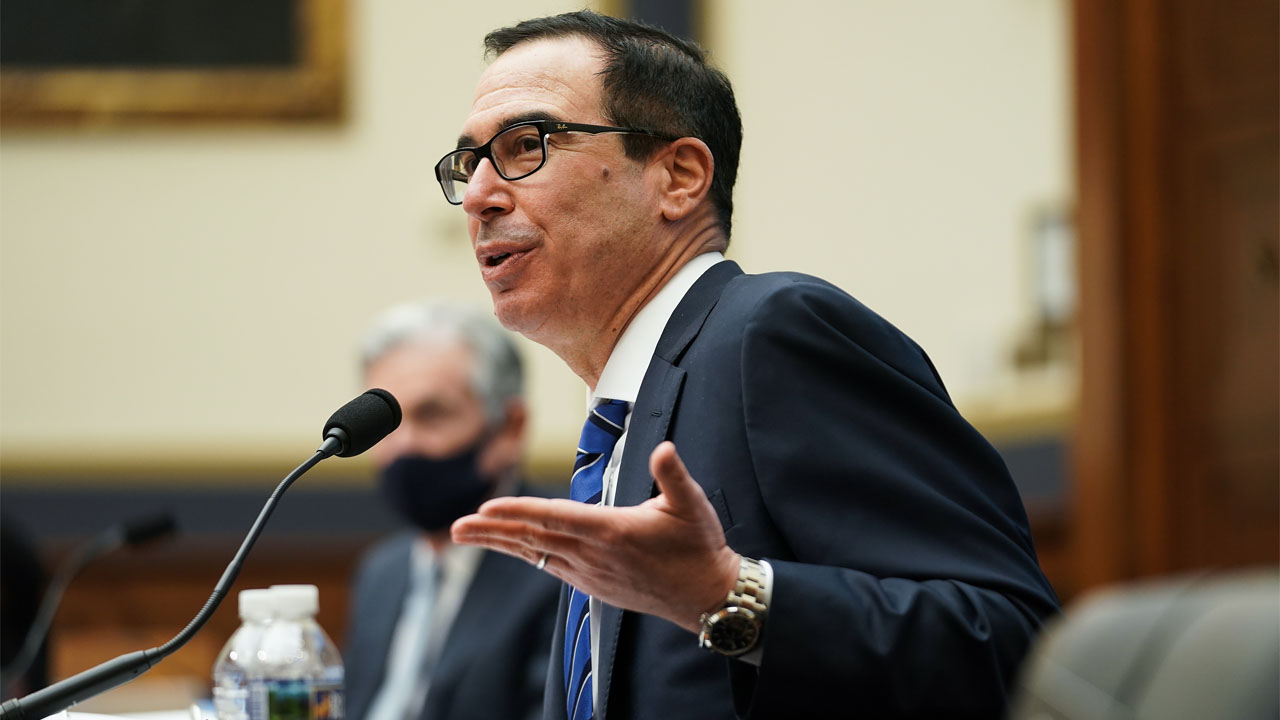 (FILES) In this file photo taken on December 2, 2020, US Treasury Secretary Steven Mnuchin testifies during a House Financial Services Committee hearing on “Oversight of the Treasury Department’s and Federal Reserve’s Pandemic Response” in the Rayburn House Office Building in Washington, DC. – A new round of pandemic relief checks for Americans will start going out next week, US Treasury Secretary Steven Mnuchin said on December 21, 2020. Congress is expected to give final approval to a $900 billion stimulus package later Monday that will include payments of $600 to all Americans. (Photo by Greg Nash / POOL / AFP)

US lawmakers on have approved a $900 billion relief package for the world’s biggest economy that will provide a long-sought boost for millions of Americans and businesses battered by the coronavirus pandemic.

Overwhelming approval in the Senate and House of Representatives on Monday cleared the way for the legislation to be sent to President Donald Trump to be signed into law.

Trump signed a stopgap measure early Tuesday to keep the federal government funded until December 28 and avert a shutdown.

“The American people can rest assured that more help is on the way, immediately,” Republican Senate leader Mitch McConnell said on Twitter.

As the Covid-19 death count rises amid a massive coronavirus resurgence that further threatens the economy, Republican and Democratic legislators have finally hammered out a bill after months of wrangling and partisan finger-pointing.

The deal will spare millions of jobless workers who were days away from seeing their unemployment benefits expire, and provide a new round of cash payouts.

“It’s a good bipartisan deal,” Democratic House Speaker Nancy Pelosi said. “We will do some good with this legislation.”

But “as President-elect Joe Biden has said, it’s a first step, and we will need to do more. More to get virus assistance to crush the virus. More money to buy vaccines,” she said on the House floor.

The US is facing the world’s largest coronavirus outbreak, and cases have surged in recent months, threatening a tentative economic recovery. The death toll has topped 319,000.

Recent data showed retail sales slowed heading into the usually-strong holiday shopping season, while new applications for unemployment benefits have risen for four of the past five weeks after months of declines.

Trading floors in Asia and Europe were little moved by the announcement, with analysts saying the legislation had been priced into markets.

“The new… bill will help some workers and businesses get through the winter but it will do little to accelerate the arrival of an economic recovery,” said David Kelly, at JP Morgan Asset Management.

Cash injection
The massive package is part of a $2.3 trillion, almost 5,600-page “coronabus” bill that includes a so-called omnibus bill to fund the government for the coming year.

The measure will include a new round of pandemic relief payments, and US Treasury Secretary Steven Mnuchin said the $600 checks will go out as early as next week.

That amounts to “$2,400 for a family of four, so much needed relief just in time for the holidays,” Mnuchin said Monday on CNBC.

While the direct payments are only half the amount provided by the $2.2 trillion CARES Act that Congress approved in March, Mnuchin said it is a “very fast way of getting money into the economy.”

Americans earning less than $75,000 a year will receive $600 payments, which will be reduced for those earning higher incomes.

The largest provision is the $275 billion in Paycheck Protection Program (PPP) aid for businesses, which are government loans that convert to grants if spent on wages and rent.

The agreement also contains $25 billion in rental assistance and extends an eviction moratorium for one month.

Biden, who will be sworn in on January 20, has welcomed the agreement but said Sunday that much more will be needed to provide “support to struggling families, and investments in jobs and economic recovery.”

After months of talk, the deal seemed endangered in the final days by a dispute over a Republican-backed provision to limit the ability of the Federal Reserve to provide more emergency lending.

But Democrats were able to block that move by Republican Senator Patrick Toomey, although they were not able to insert billions of dollars in aid to state and local governments on the front line of responding to the virus impact.

Farmers hit back at Bloomberg

Trump’s May 1 target too optimistic for U.S....