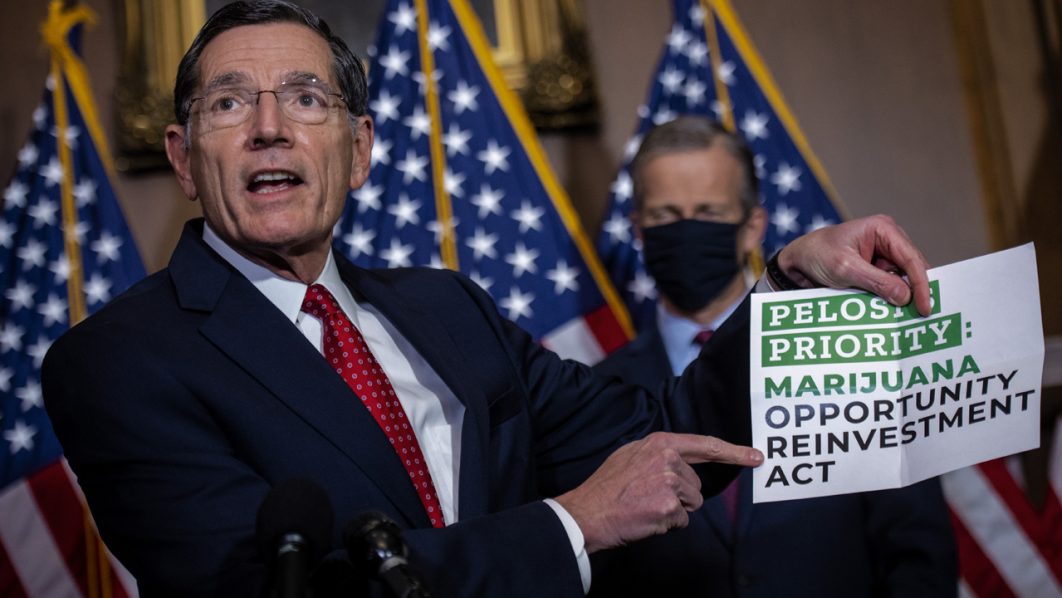 WASHINGTON, DC – DECEMBER 01: Sen. John Barrasso (R-WY) holds up a sign that reads “Pelosi Priority: Marijuana Opportunity Reinvestment Act” as he talks to reporters following the weekly Republican Senate conference meeting in the Mansfield Room at the U.S. Capitol on December 1, 2020 in Washington, DC. The Senate GOP leaders were asked about the chances of Congress passing another coronavirus relief bill along with must-pass government funding legislation. Bill O’Leary-Pool/Getty Images/AFP

US House legislators voted for the first time Friday to decriminalize cannabis, a major step towards bringing federal laws in line with states and other countries that have freed up the use of the drug.

The House of Representatives, controlled by Democrats, easily passed the bill by 228 votes to 164. It stands little chance however in the Senate, which is controlled by Republicans.

The bill would remove marijuana from the federal Controlled Substances Act, which listed it beside heroin and cocaine as a dangerous narcotic and mandated tough penalties.

The drug’s inclusion on the list has left the US federal government out of line with the many states which have legalized marijuana for medical use and some, like Colorado, which has completely freed and regulated it for recreational use.

The bill was the culmination of five decades of supporters lobbying to have the federal government recognize the relatively low harm inflicted by cannabis usage compared to other drugs, as well as the failure to stifle the trade while jailing hundreds of thousands of people for minor offenses.

It would see the records of many people arrested for marijuana use expunged and calls for the review of the sentences of those currently jailed on federal cannabis charges.

And it would let states set their own laws but also launch federal regulation and taxation of the industry, as it does for alcohol.

“This is a historic moment,” said Democratic Representative Tulsi Gabbard, who has pushed the legislation.

– Out of step –
Democrats argued that Black Americans have suffered legally much more than whites for arrests and convictions; that federal decriminalization would allow injured veterans better access to medical marijuana, and that longstanding federal blocks on marijuana research would end.

Democrat Earl Blumenauer noted that marijuana usage tests by employers and police are poor and not completely reliable.

“We don’t have a good test and the federal prohibition on research stands in the way of this.”

Some Republicans argued that the bill will encourage usage.

Others said it will create another layer of bureaucracy and taxation in the Treasury department.

One noted that it will place a federal tax of only five percent on cannabis, a fraction of that for tobacco.

But California Republican Tom McLintock said he favored the bill because legalizing and regulating cannabis would take the industry out of the hands of violent growers and traffickers.

“I think marijuana use is a pretty bad idea. My wife and I have never gone near the stuff,” McClintock said before the vote.

However, he said, “We have to recognize that the prohibition law has done far more harm. It has spawned a violent underground economy.”

“Radish farmers don’t kill each other over territory.”

Increasingly the US federal approach is out of line with international trends.

Northern neighbor Canada fully legalized marijuana in 2018 and has a number of large companies growing it commercially.

And Mexico also took a step closer to legalizing marijuana for recreational and medicinal use last month as the Senate approved a bill aimed at undermining the violent gangs that control the supply of the drug, much of it destined for the United States.

Where a convicted murderer could win re-election

Trump’s May 1 target too optimistic for U.S....

Out of the house: Democrat Biden makes first...

‘I will never lie to you’