US political leaders line up for early Covid vaccines 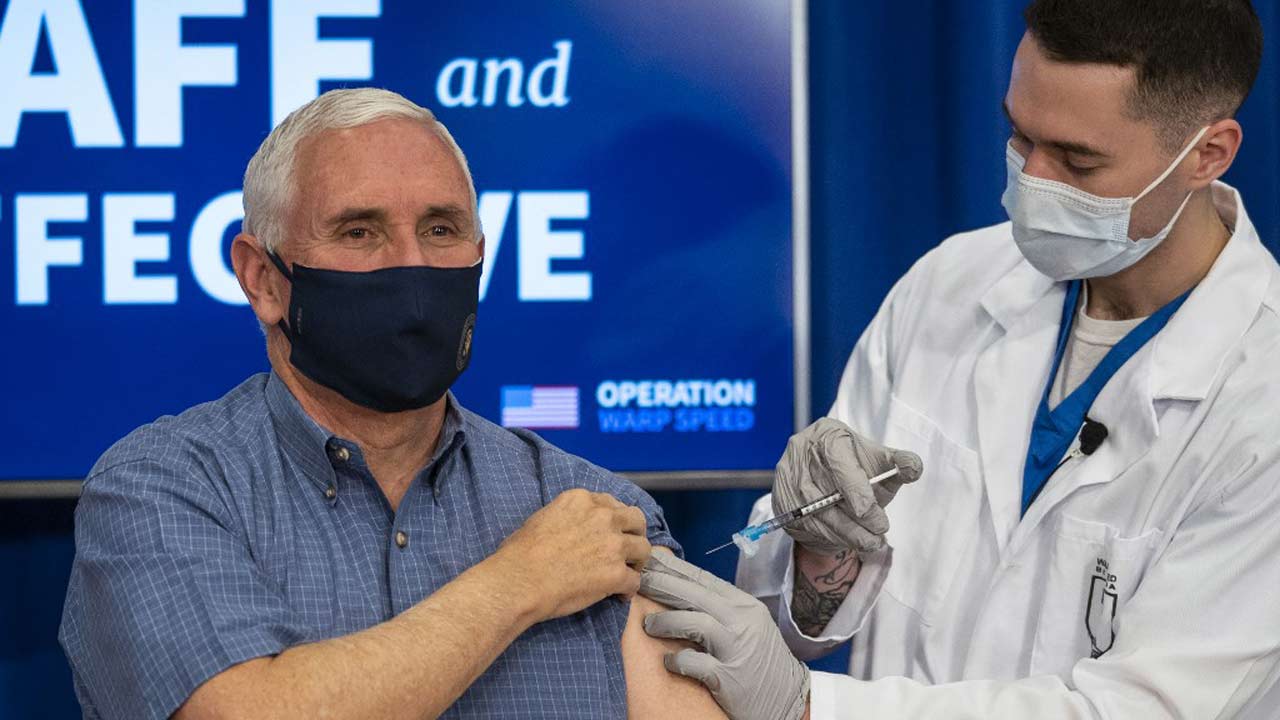 Several senior US officials including Vice President Mike Pence got early Covid-19 vaccinations Friday, contrasting with Europe, where two leaders were quarantining after testing positive and EU regulators have yet to approve a vaccine.

Pence’s public inoculation against the coronavirus was the most high-profile attempt yet at persuading vaccine-skeptic Americans to join a massive national effort to halt a pandemic that has killed at least 1.66 million people and infected more than 74 million worldwide.

President-elect Joe Biden, who will take office on January 20, announced he would take the vaccine, also in public, on Monday.

The summit is believed to be where French President Emmanuel Macron caught the virus — the announcement of his diagnosis a day earlier led a host of European leaders and top French officials to rush into self-isolation.

Macron acknowledged Friday he had been “slowed down” by his infection, but insisted he was doing well and still actively involved in “priority” government business including Brexit trade talks.

US President Donald Trump, who has been a longtime skeptic about the seriousness of the pandemic, wished Macron “a speedy recovery,” the White House said.

Elsewhere, world leaders from Russian President Vladimir Putin to Israel’s Prime Minister Benjamin Netanyahu are also pledging to get public injections in order to boost confidence in the vaccines.

The first wave of vaccinations in the United States, where more than 310,000 Americans have died, are using the Pfizer/BioNTech drug.

Another vaccine, made by Moderna, is now expected to become the second shot allowed in a Western country after a panel of US experts recommended emergency use approval.

But he has been eager to take credit for record-fast vaccine breakthroughs, and he sparked confusion Friday when he jumped the gun to declare Moderna approved, ahead of a final verdict from the Food and Drug Administration.

Two billion doses
The European Union faces pressure to approve vaccines after Britain and the United States have already administered tens of thousands of shots, while China and Russia have launched efforts with domestically produced vaccines.

The bloc intends to begin its inoculations with the Pfizer-BioNTech vaccine before the end of the year, with some countries naming December 27 as a start date.

Poorer countries also got a boost Friday when the World Health Organization and partners said vaccines would be distributed early next year to the 190 countries in its Covax initiative, a pooling effort formed to ensure an equitable distribution.

“The light at the end of the tunnel has grown a little bit brighter,” WHO chief Tedros Adhanom Ghebreyesus told a virtual press conference.

Two billion doses have been secured from developers AstraZeneca, Johnson & Johnson, Novovax and Sanofi/GSK, though none of their candidates have so far received authorization for use.

In China, at least one million people have already received shots from homegrown vaccine candidates approved for emergency use.

After focusing on priority groups, the country plans to widen its program to the public in southwestern Sichuan province early next year, health officials said.

China’s five coronavirus vaccines are in the final stages of development, but none has received official approval.

Europe reels, new variant in SAfrica
Even as vaccine plans advance, the virus continues to rage.

In the United States alone, more than 3,000 people are dying a day, and infections keep hitting senior officials.

On Friday, the iconic Washington Monument was temporarily closed after Interior Secretary David Bernhardt, who has reportedly been giving private tours to his associates, tested positive.

Europe is still in the throes of a winter surge that has caused almost 37,000 deaths over the past seven days, the highest weekly toll since the start of the pandemic.

Austria’s chancellor, Sebastian Kurz, on Friday announced a new month-long lockdown starting December 26 in response to a wave of infections.

And Sweden announced a U-turn on face masks, recommending that they be worn on public transport at peak times, having previously resisted their use in the fight against Covid-19 except in health care.

In South Africa, Health Minister Zwelini Mkhize signaled the detection of a severe coronavirus variant that could explain the rapid spread of a second wave of cases.

Latin America is also seeing hard days, with Brazil and Mexico logging the highest number of new deaths after the United States.

Mexico City’s mayor announced that the capital and neighboring state would suspend almost all activities from this weekend as virus cases rise — allowing only such essentials as the sale of food, energy, transport, manufacturing and financial services.

But in Brazil, President Jair Bolsonaro — who has systemically downplayed the coronavirus — continued to undermine the country’s own immunization campaign, this time with the outlandish suggestion that the Pfizer-BioNTech vaccine could turn people into “crocodiles” or “bearded ladies.”

US Congress struggles over stimulus deal amid new shutdown threat

Abia polls: APC Passes Vote Of No Confidence On ABSIEC *Our lives are in Danger in Avonkwu, APC q Cries Out Over Alleged Open Attack By  PDP Candidate *APC Insist On Staging Violence… PDP Bende

Reasons for hope: the drugs, tests and tactics...

No poison found in suspect letter to Tunisian...

China stops for three minutes to remember the...

Coronavirus in the US: State-by-state breakdown