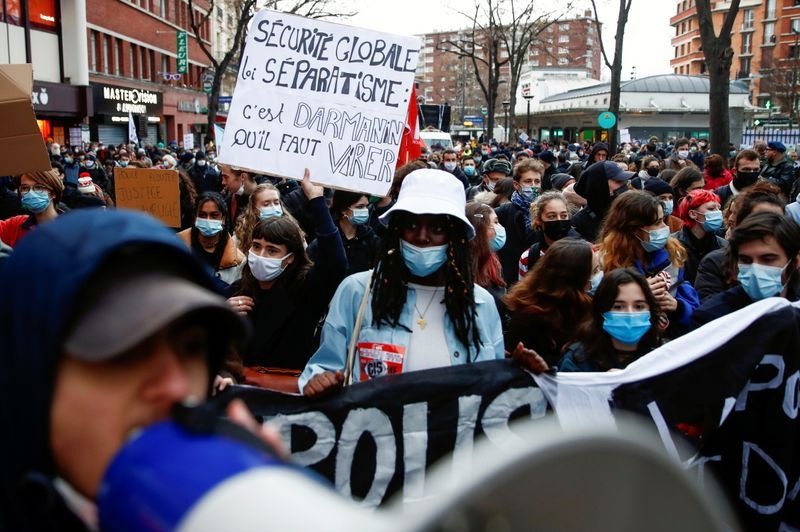 People attend a demonstration against the “Global Security Bill”, that right groups say would make it a crime to circulate an image of a police officer’s face and would infringe journalists’ freedom in the country, in Paris, France, December 5, 2020. REUTERS/Gonzalo Fuentes

Violence erupted in Paris on Saturday for the second consecutive weekend at a mass protest against a new security law, with demonstrators clashing with police, vehicles set alight and shop windows smashed.

The weekly nationwide protests are becoming a major headache for President Emmanuel Macron’s government, with tensions intensified by the beating of a black music producer by police last month.

Members of the so-called yellow vests movement, which shook Macron with protests against a lack of equality in France over the winter of 2018-2019, were also prominent in the rally.

Windows of a supermarket, property agency and bank were broken while several cars burst into flames along Avenue Gambetta as demonstrators marched towards the central Place de la Republique, AFP reporters said.

Objects were also thrown at police who responded by using tear gas, in a repeat of the violent scenes from the protests last weekend against the security law that would restrict publishing pictures of the faces of police.

Some demonstrators used objects left into the streets to create impromptu barricades that they then set on fire.

Protesters, some letting off smoke bombs and firecrackers, shouted slogans like “Everyone hates the police.”

Interior Minister Gerald Darmanin wrote on Twitter that 22 people had been detained in Paris so far by police, who he said were facing “very violent individuals”.

– ‘No contradiction’ -It was one of around 100 protests planned throughout France on Saturday against the new security law.

Police had deployed in force to avert trouble after the violent clashes erupted during the demonstration in Paris a week ago that saw dozens wounded.

Media freedom and human rights groups have led protests for weeks to have the government scrap or revise a bill that would restrict the filming of police, saying it would make it harder to prosecute cases of abuse.

After four French police officers were charged November 30 over the beating and racial abuse of black music producer Michel Zecler, lawmakers from Macron’s party pledged a “complete rewrite” of part of the draft law.

Under a sign demanding the withdrawal of the security law, CGT union leader Philippe Martinez said several causes were coming together.

“There is no contradiction between public and individual freedoms and the need to fight job insecurity and unemployment,” Martinez told AFP.

He referred to the “abuse of employers” and the loss of worker protections.

Not ‘reducing freedoms’
The new clashes came after Macron gave hugely-anticipated interview on Friday to Brut, a video-based news portal aimed at young people, which was seen as an attempt by the president to win credibility with youth particularly concerned by the actions of French police.

Macron acknowledged “there are police who are violent” and insisted that “they need to be punished”.

He acknowledged that “when you have a skin colour that is not white, you are controlled much more (by police). You are identified as a problem factor. And that cannot be justified.”

But he also lashed out at the violence against police at last weekend’s rally in Paris, which he blamed on “crazy people”.

“I cannot let it be said that we are reducing freedoms in France,” he said.

Last-ditch effort to save Brexit trade talks from failure

Go For Western Economy With These Pioneering

U.S. to tell doctors to report cases of...