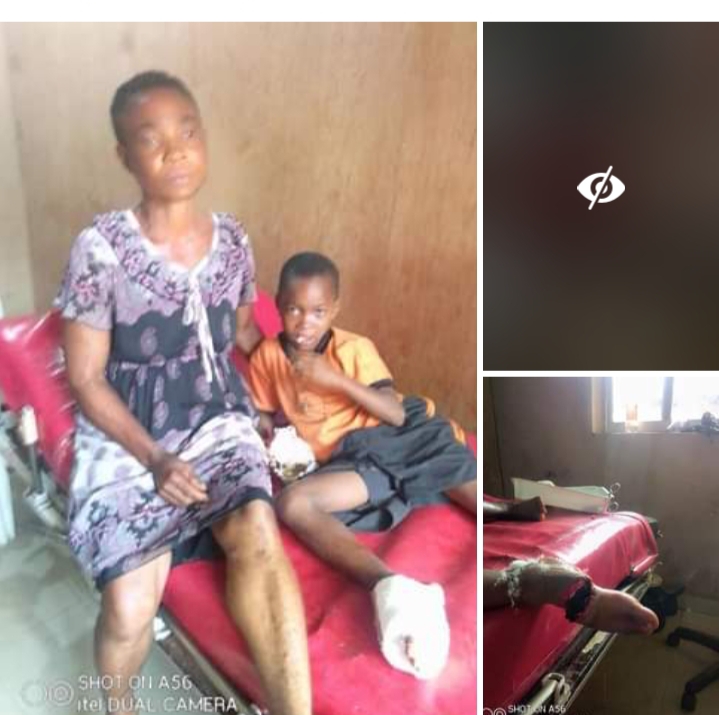 Pandemonium struck in Ikwuano LGA of Abia State, in the South East region of Nigeria, on July 28, as a pupil of Community Primary School, Amapu Awomukwu, in Ikwuano, (name withheld) reportedly chopped the right foot of his mate identified as Master Courage Ijeoma with a very sharp knife, while chasing a rat.

According to a post shared on Facebook by an illustrious son of the local government, Courage was immediately rushed to the hospital for immediate treatment but was regrettably rejected by all, as they all considered downright amputation of the macheted foot as their only resort.

However, some concerned persons from the area without further hesitation, made for University Teaching Hospice, (UNTH), Enugu but got a rude shock, as a whopping sum of #300,000 (Three Hundred Thousand naira) was demanded by the hospital before the commencement of treatment.

The Facebook user revealed that some benevolent indigenes of the area made donations within the shortest sketch of time and a total of #200,000 raised, with an outstanding pledge of #100,000.

However, luck ran out of them on the set date of the correctional surgery, following the commencement of an indefinite strike, as embarked upon by the National Association of Resident Doctors, thus leaving the life of poor Master Courage whose right foot, as shown in the pictures is virtually dangling, in utter jeopardy.

READ MORE:  See Kenyan man who returns Home 47years After He Was Sent To Buy Rice For Family

According to the Facebook handler, the possibility of the survival of the victim who is yet to be discharged from the hospital is completely out of question consequent upon Resident Doctors’ indefinite strike
Below is the full post with screenshots:

“Who did Courage Offend?

“On the 28th of July a sad event occured in Amapu Awomukwu where a pupil of the Community Primary School while chasing a rat used a very sharp machet to mistakenly cut the leg of a fellow pupil – Master Courage Ijeoma. The foot just hung on by the skin.

“The little boy was rushed to different hospitals that all rejected attending to him owning to the fact that they could only handle outright Amputation.

“But then the Nigerian factors began to play. On the set date of the correctional surgery, The National Association of Resident Doctors commenced an indefinite Nationwide Strike. The odds turned against Courage.

“As if that was not enough, some spirited Ikwuano sons battled to seek alternative hospitals. They identified 2. One in Aba and one in Umuahia but Courage had already been admitted and had to be discharged.

“How would discharged be a problem? A doctor is expected to sign the discharge card but unfortunately, they had gone on strike and suddenly none was reachable again.

“The painful part of this entire story is that while time passes by, the disconnected part of the leg looses life. If the worst is to happen, would the accident or funds be blamed? No. Blame it on the Nigerian factors.

“As I write this painful script, Master Courage has still not been released by UNTH to seek medical attention elsewhere. I’m reconsidering putting my savings together to return abroad. I thought coming back was to help make our country get better but that dream is looking more bleak each day.

“Be of good Courage Master Courage. While Ifeany AJUZIE and co work to get you out there I’m standby here to take you to another Hospital. I just hope that this race against time does not become an effort in futility.

“Little Master Courage has not offended anyone. It is Nigeria that is offending him.”