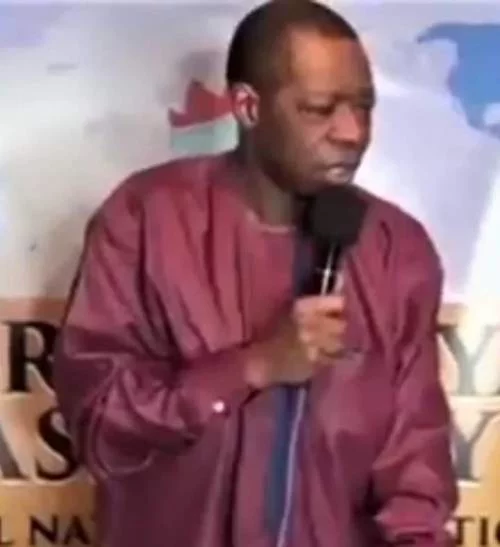 Why I Charged My Church Members 310,000 Naira To Take Them To Heaven- Ekiti Pastor,

Pastor Ade Abraham of Christ High Commission Ministry, also known as Royal Christ Assembly, Kaduna State, who charged his members N310,000 to make heaven has said that he got authority from God to do so.

The Ekiti State police command recently revealed that it had invited Pastor Noah Abraham, for allegedly collecting money from members of his church on a promise to take them to heaven after the rapture.

The pastor of the church, located in Omuo-Ekiti in Ekiti East Local Government Area of Ekiti State, was said to have ordered members to relocate to the church and pay N310,000 each to be able to have access to heaven at the end of the world.

Abraham kept about 40 people in his church at the Araromi-Ugbesi in Omuo-Oke, Ekiti State in what he described as preparation for the coming of Jesus Christ, otherwise known as the rapture.

Some of his church members have allegedly sold their belongings, hoping Jesus would meet them while camping at his church while a few others are said to have abandoned their families who refused to join them to live in the church.

According to BBC Pidgin, the pastor believes a “mighty palace” will descend from heaven and land on his church, where members would live forever with the “one that sent him.”

Abraham was allegedly charging money to fly them to heaven, saying with the relocation, the gate of heaven would open.

However, the pastor who confirmed to BBC Yoruba on Wednesday that he truly told his congregation to pay N310,000, said he made the declaration when he noticed that his members’ troubles were increasing.

He affirmed that he did it because he got the authority of God whom he said had called him to become a cleric.

“Truly I told my congregation to pay N310,000, I made the declaration when I noticed that my members’ troubles were increasing.

“I did it because I got the authority of God who called me to practise for all that want to serve the Lord with their whole heart.

“I have never received any payment yet from any member of the church, and the Ekiti State Police has intervened in the matter.

“I was called by the police for Investigation and all the members of the church were there and all of them took notes of what happened,” he said.

Meanwhile, the Christian Association of Nigeria (CAN), Kaduna State chapter has denied knowing Abraham, who is alleged to be resident in the state.

Rev. John Joseph Hayab, CAN Kaduna state chairman, in a statement explained, “The attention of the CAN Kaduna State Chapter has been drawn to the news in circulation in some sections of the media about one pastor described as Ade Abraham, offering to take his members to heaven if they pay a fee of N310,000 only.

“Even though Pastor Ade’s offer of a ticket to heaven is cheaper than the ransom Kaduna bandits ask their victims, sadly, CAN has not found anyone who knows the location of the said church or established a church in Kaduna town with that name or in any local government areas in the state.”