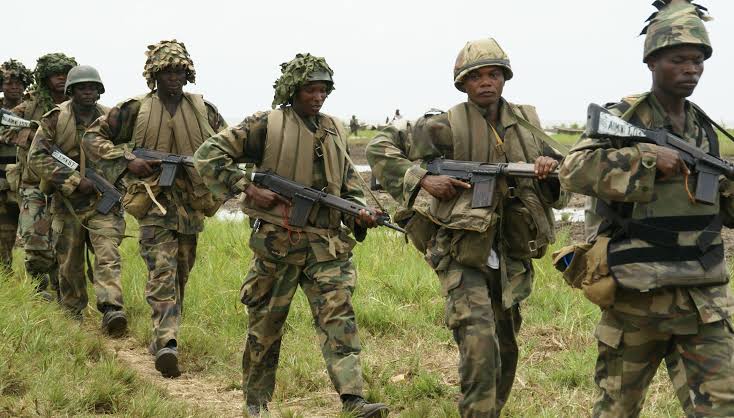 There was tension in some parts of Forest Umunna in Orlu and Orsu Local Government Areas of Imo State, yesterday, as hundreds of military operatives yesterday, launched heavy attacks  on the  camps of the Eastern Security Network, ESN.

According to Vanguard’s investigation, the military launched the  attacks on hearing that the members of the Eastern Security Network, ESN, had set up a base in the forest from where they would execute their operations.

An insider who spoke in anonymity explained how the military invasion started: “The military first visited the camp of the ESN in Umunna in Orlu local government area and before they got there, our men got the information and relocated. They also visited another but did not see anybody. So, the  military destroyed the camps of the ESN. Nobody was killed in this operation. But our people are  living in fear.”

Residents of the affected areas also confirmed that the military started with a show of force.

Another villager who introduced himself as Chief Thomas Ndudi, gave his own side of the story. According to him: “On Tuesday, we saw over 30 trucks of  the military  moving in their convoy  in and out of Orlu in search of the members of the Eastern Security Network. They kept searching for them through out Wednesday and  yesterday, they discovered their camps and started destroying them.

“The first day, they  even used helicopter to hover around the forest locating their camps. The truth  is that villages close to the forest are living in fear as the  sound of guns and airstrikes made them run inside their houses and some  of them abandoned their homes out of fear of being hit by  stray bullets.”

Reacting to the development,  the Chidi Ibeh- led Ohanaeze Ndigbo condemned the invasion of Orsu forests by soldiers and other security operatives in search of the members of the Eastern Security Network, ESN, and called on the chief of Army Staff to immediately withdraw the troops.

According to the publicity Secretary of the group, Comrade Temple Chika, why should the army and other security operatives single out the ESN to clamp down when they are not molesting anybody but protecting Igboland against the activities of destructive Fulani herdsmen.

“We see ESN as part of community policing, helping to maintain security in the hinterland of Igboland.

In its reaction, Imo State, Chief Press Secretary/ Media Adviser to Governor Hope Uzodimma, Oguwike Nwachukwu said: “People are just getting worried and afraid for no just cause.

“Orsu local government area where security personnel are combing shares boundary with Anambra State; they are just combing, not molesting anybody.

“People have no need to get agitated and afraid. They are trained for what they are doing”.