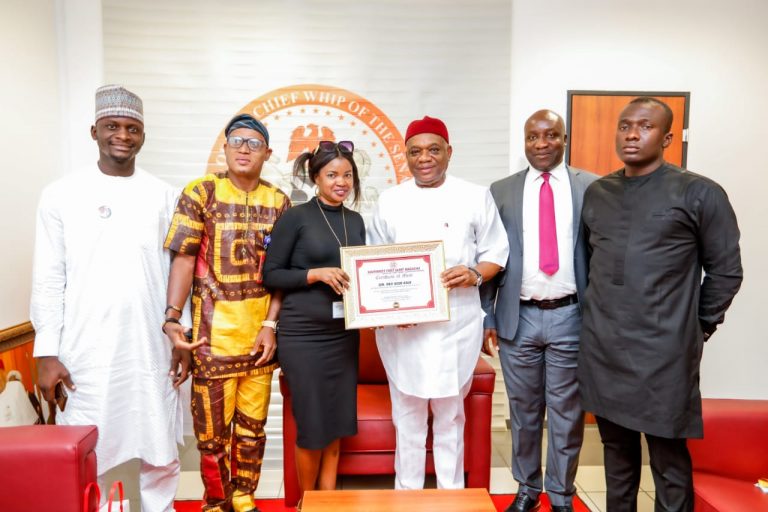 The media group, publisher’s of Southwest first alert magazine said that the achievements of the former Governor within his first tenure in the 9th Senate and his impact as Governor of Abia (1999-2007), stressing that Orji Kalu’s national appeal and close relationship with major ethnic groups in the country will unite the country.

The Southwest based media organisation made this disclosure while presenting the Abia North Senator with an award of  recognition as the most performing Southeast Politician of the Year.

Publisher of the magazine , Mr Oladokun Aridunnu Omo while presenting the award plaque to Kalu who was physically present said that Kalu clinched the prized award following a nationwide poll conducted by an independent firm on the magazine’s behalf.

Oladokun outlined Senator Orji Kalu’s consistency in delivering
intervention projects since assuming office   within and across his Senatorial zone including his key bills and Motions.

“When the people voted for you, they voted based on your achievements. To say the least you deserve to be Nigeria’s President, Nigerians are watching you closely. From the day you became a Senator you have continued to deliver projects to your people, through that you have touched millions of lives that is why you emerged as the best Senator.

“You have proven to be a man of integrity and you are one that we can trust”. It is on that basis that we are presenting you with this meritorious award of excellence as the best performing Southeast Politician and Philanthropist”.

In his reaction, Senator Kalu described the award as additional motivation to do more for his constituents adding that leadership is call to service.

” I see leadership as call to service, my duty is to to work for my people, so far we have done over 50 road projects , we have also reconstructed and rehabilitated over 30 schools and we are going to do more” “I thank you for this award” Kalu concluded.