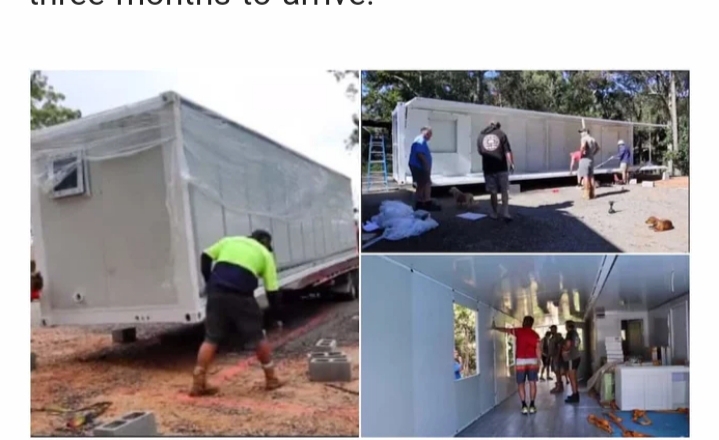 A young man with the name Zackary South on TikTok has stirred reactions on social media with his container house
Zackary stated that the shipment took him three months to get from China after he placed the order.
Many people who saw how the house was installed asked how much the building cost him financially
A man, Zackary South, has shown people the alternative route they can take to own a home without having to lay blocks and use cement.

In a video that has gone viral on TikTok , Zackary revealed he imported a container home from China and it took the order three months to arrive.
How it was installed
When the container got to his place, it turned out to be a 2-bedroom house with a kitchen and bathroom after installation.

To set it up, the whole family had to put all hands on deck as they employed a car jack to place the house on some blocks.

They were able to stretch out the folded parts of the house. After spending hours on installation, the setup was completed.

“Perfect prefab building (how much it cost) could be used for first homes young people.”

“Why are people so interested in these things a trailer is a trailer.”

“How much does it cost, cause I would love one.”

“I just want to know how much it cost.”

“Cause you never own and pay taxes for life at least with this house you’d really own it.”

“This should be used for homeless what a great concept.”

“Thats a final foundation. could have built a permanent foundation while waiting on this.”

Meanwhile, Legit.ng earlier reported that a beautiful building that attested to the power of recycling got many social media users talking.

Posting about the house, the Danish embassy in Ghana said the building is the country’s first house made from plastic waste. The mission also revealed that the building was done with help from the Skills Development Fund.

A man named Danida Nelson Boateng applied to the organisation and his workers were trained. The fine house was made from 13,000 kilograms of plastic that were cast into bricks.