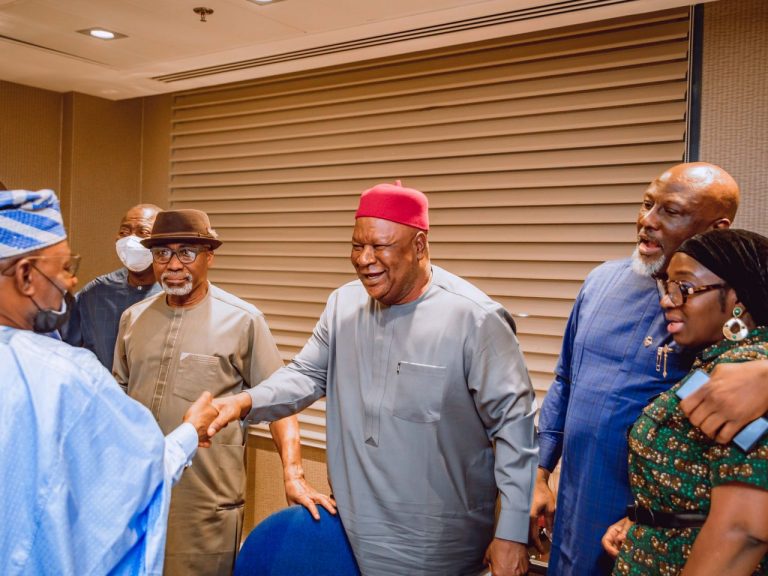 This is even as no fewer than 85 support groups, under the leadership of the United for Better Nigeria Initiative (UBNI), have declared support for South-East presidency ahead of the 2023 general elections and adopted former Senate President Anyim Pius Anyim as their presidential aspirant.

Receiving the groups on Tuesday in Abuja, Mrs Nkoli Mkparu, Coordinator General, United for Better Nigeria Initiative (UBNI), said this is the time for a south-east president to emerge.

Mkparu said immediately after the 2019 general elections, the push for a Nigerian President of South-east extraction became intense.

According to her, the unity of mind and purpose of very few patriotic Nigerians, who came together through shared beliefs and convictions, necessitated the formation of the groups, now known as UBNI with over two million members across the world.

She said that UBNI held consultations and meetings across chapters, zones within and outside the group and visited some major stakeholders from different geopolitical zones.

“We interacted with presidential aspirants of South-east extraction, before and after they evidently declared interest to contest in the 2023 general elections.

READ MORE:  "My apologies to all, I have decided to forgive my offenders
… Read Gov Umahi's Plea

“Just on Monday, our NEC received the report of that committee, and they unanimously affirmed their recommendation that Sen. Anyim Pius Anyim, should be adopted and supported in the 2023 presidential election.

“So today, we will be carrying out two major assignments here. One will be to welcome the more than 80 other groups who are here to join UBNI for the greater task ahead and two to let the whole world know that we have adopted Anyim.’’

Mkparu said that UBNI believes that Nigeria is redeemable, and is convinced that much more improvement would come its way as citizens work to usher in a new face in governance through the election of a credible President come 2023.

“To get a credible person who will work to reposition, refix, rebuild, and return Nigeria to its glorious past remains a task which UBNI volunteered to be part of in the next political dispensation.‘’

“Our efforts have been tremendous and involving in this regard. For instance, “we have: a. Extended hands of fellowship to other groups across Nigeria.

“These groups who share in the same ideology, passion and commitment that the next president of the Federal Republic of Nigeria should come from the South east and must be credible and well acceptable personality,’’ she said.

Mkparu said that at the group’s latest count, about 85 such groups had agreed to form an irrevocable alliance with UBNI with a multi-dimensional force across Nigeria with about two million members, operating in about 85 chapters across the world.

She said that the support for Anyim is inevitable because it is morally right to have a south-east president and after their search Anyim was deemed fit to contest.

Mr Usman Sulieman, Coordinator of Northern Supporters of Ndi-Igbo for President 2023, said so far Nigeria had seen the leadership qualities of the North and the South which belonged to three major ethnic groups except the East.

Suleiman, therefore, said that justifiably and non negotiably, there was the need to also see the leadership qualities of the South-East as well.

“This is because peace, progress and justice will never be attained without justifiable rotational leadership, so we need to support the south-east to become president because they are also Nigerians so let us try them too,’’ he said

Dr Kayode Odayemi, Coordinator, Omo Egbe Anyim Rere, also drummed up support for Anyim, adding that “we are behind him and by God’s grace he will be president come 2023 because he is ready for the job.

“It is time to redeem the nation and Nigeria will be great so let use let us give him the support because he can do it, so I urge you all to garner support for him from friends and family because he has what it takes to take the nation to that promised land flowing with milk and honey and everyone deserves to enjoy.’’

Mr Finecountry Iyioku, the Zonal Coordinator, South-South, said so far the only zone yet to be tested for presidency in a democracy is the South-East .

Iyioku said that Anyim was picked because of his record of experience as a former senate president and as Secretary to the Government of the Federation (SGF) which was the engine room of governance.

He, therefore, called on all regions to give the South East a chance so Nigeria could experience a positive turnaround in all spheres.