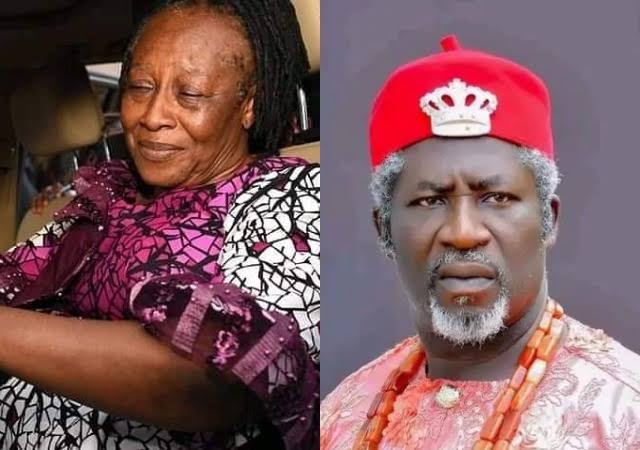 Mrs. Ozokwor, fondly addressed by her stage name, hence Mama G urged her colleagues in the Industry to consider one another as members of same family, thus eschewing malice, gossiping and repugnance for and against one another.

Mama G made this hearty call over the weekend, shortly after the obsequies of late Nollywood Actor, Daddy Sam, during an exclusive interview with Famous Reporters.

Describing the Industry as one big family, Evangelist Ozokwor reiterated that Daddy Sam’s life on earth epitomized love, peace and unity, as she implored members of Nollywood to follow the legacies of the deceased.

Hear her: “Clicking against some other people should stop. It’s through that, evil starts entering our heart, then we begin to make whispers. For instance, you’re sitting with somebody on set and we’re like five persons and two persons begin to whisper in the ears of each other. What are you saying that you don’t want the other person to hear? Open up, it’s a family; we talk, we discuss and after that particular set, we go home and meet some other people on another set.

Emotional saddled Mama G reiterated that “Daddy Sam was an exemplary man every other man would emulate. He was clean, just like the Bible says, God wants us to be clean, clean in our heart, physically, in our surroundings and every part of our life; cleanliness and Holiness is next to godliness.

“So, I wish that people will learn from him; that was why when he died, everybody got involved to give him last respect, because he respected himself, you don’t earn respect because you have become a very big star. No! You earn respect; you will see some people die no body will even think about them; I know a lot of people have died.”

Furthermore, Mama G, while describing the African Magic viewers’ favorite and multiple award winner, disclosed that, the latter’s peaceful disposition was his major tool which inarguably enabled him avert quarrels with anyone, thus he was at peace with all and sundry, up until Mr. Death stuck.

READ MORE:  10 Thoughts, Prayers and Concerns About Netflix's Love Is Blind, Which Is Absolutely Worth Watching

“He was peaceful, he wouldn’t want anyone around him to go home with the agony of any such, even if he was making contributions and he noticed that anyone was happy with his idea, he would still plead with you and would laugh and at the end he would say, “we are just discussing and sharing views. You know. He doesn’t want anyone to go home with anything else except peace in his heart”.

Mama G regretted that the shocking departure of the rare legend whose lasted for only but a fraction of two years though impactful, had created a wide vacuum, as she wondered if any could replicate his attributes in the Entertainment Industry.

Wailing, she said: “we don’t know how many people in the industry that can replicate his good sense of humor and disposition. He has not been for so long in the industry, and I guess you know that. I know how we all started and where we are today in the industry. Some call him Uncle Sam while some call him Daddy Sam and that came up with all this epitome of cleanliness and he showcased it even in his character, his everyday’s life and I wish somebody else could take up from where he stopped.

“Whether you are a man or woman be to yourself and be friendly with people because you never can know who will be the person that would help you tomorrow, help is not all about money; he has never given me money, but I have always cherished him, anytime I came on set and I see him, it’s like the family is complete, so I pray that all this ganging up ends.”

Asked about her views on the mammoth crowd of mourners, particularly Stars from the Industry, the Famous woman of God restated that people from ‘all Walks of life’ had willingly paid their last respect to the rare legend unlike what she described as a norm, wherein members would scarcely respond to such calls.

She said: “What happened in Asaba has not happened in a lot of places in a long time. I know we sometimes try to conduct burial for people, we do our best to keep begging people to come now and we get to ask questions like; Why are you not coming for candle light? But, no! His own wasn’t like that rather everybody was keying in willingly.

“Those who couldn’t contribute, money, did any other thing. Well, they don’t even need our money because his family is wealthy but we just had to do something because he was one of us, and he will be the first to do for others. So,
I just pray that the love of Christ would enter our hearts, there’s no wasting time anymore. Because people are dying everyday. The number of people that die in a day is more in number than the people they give birth to, I’m telling you the truth.

“So, everything is dwindling and I just pray that Uncle Sam’s life and death will teach us a lesson; to love one another, to be clean, sparkling clean before our God who is a clean God and then clear your heart of every prejudice. Even if it will hurt you, because the Bible says that people must hurt you, it must happen because one’s there two or more people, something has entered.

Mama G used the medium to appeal to her colleagues in the Industry, Christians and every human being in general to imbibe the spirit of forgiveness and purity of the heart towards one another, stressing that life is transient.

However, amidst an aura of confidence, she expressed gratitude to God for the glorious lifestyle of Daddy Sam, insisting that his good deeds would speak for him in his transition.

Adding, she said: “So, just forgive, keep moving, life is just like that and when we finish what we have come to this life to do on earth by His grace, when we pass on to the other side we will be able to meet him too and continue from there otherwise, nobody is talking about or prayed that Daddy Sam would have be whom we are talking about now.

Speaking optimistically, she maintained that “I know, my joy is that Uncle Sam, the way he was before man was the same way he was before God.
But, we are not judging but all we are just saying is that it is good to be transparent, it’s good to love people, it’s wonderful because when you begin to love people, you begin to love God. But, if you can’t love people, then you cant love God, so I pray that people would be able to bear the loss of this great man and the family should be able to bear it too.

“Well, we belief God that God will help us he made it and I pray for others too, myself and other that will make too, in Jesus’ name, Amen”, she prayed.

Meanwhile, Correspondents of Famousreporters.com who witnessed the funeral observed that the ceremony was ‘second to none’ in the history of Nollywood.