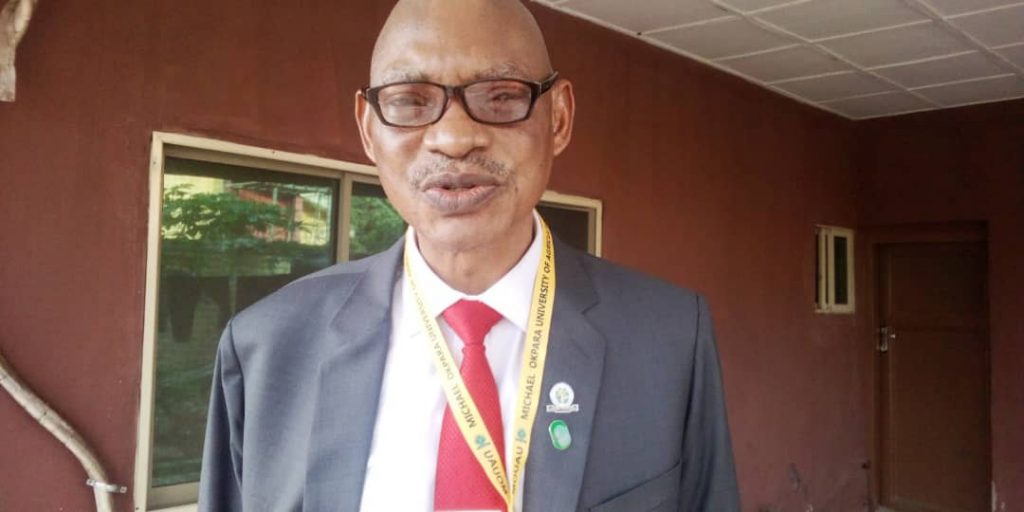 The federal government has charged the various Universities of Agriculture in the country to work assiduously towards the development of agricultural sector in the country.

President Mohammadu Buhari who gave this charge today, during the 10th Convocation ceremony of Michael Okpara University of Agriculture, Umudike, MOUAU, stated that the Agricultural policy of is Government had its focus on achieving a sustainable green economy for the nation.

In his address, the President who was represented by Muhammed Mahmoud Abubakar, the Minister of Agriculture and Rural Development, PMB solicited the support of Universities of Agriculture, urging them “to play their specialised roles
in catalysing the development of the sector.

“We have challenges, no doubt, of mainly funding, but our endowments are far greater than our constraints. Government expects that Universities of Agriculture should bravely confront the heavy dependence of our nation on imported food and raw materials with the view to reducing it to the minimum at the shortest possible time. | would like to visit your Campus again in the near future and observe agricultural technologies developed to fast-track agricultural production, processing, packaging and distribution.”

While, charging Universities of Agriculture on the need to be interwined with farmers, with a view to enhancing entrepreneurial skills
Mr. President reiterated Government’s total dependency on the former in developing educated farmers in the nation.

“I urge you to work more closely with farmers and bring entrepreneurial skills to bear strongly along the value chains of crops and livestock farming. Government is looking up to the Universities of Agriculture, as lead drivers of the agricultural sector. Developing educated farmers with the requisite knowledge and skills to drive agriculture as a business enterprise as a major outcome expected of the Universities of agriculture should be the goal.”

Speaking further, he said, “The knowledge that abounds in the Universities of Agriculture must reflect in food security for our nation, Nigeria. We shall not relent; rather we shall double our efforts at creating enabling environment for our specialized Universities of Agriculture to fulfill our collective dream of self-reliance in food production.

“We can and should be able to feed ourselves on the rich soils and diverse ecologies thar Luc has endiawed Nigerla with We should be determined to wisely exploit the natural resources and inheritance of aut nation ta feed our people and possibly export to other mations. | ure you to be foe uaed and determined, Where there is a will, there is always the way

Earlier, the Minister described the Agricultural sector as a major driver in industrial development, diversification from heavy dependence on non-renewable mineral oil, as well as achieving self-sufficiency in food production for local consumption.

Also, he disclosed that the APC government of President Buhari is committed to putting in place, policies and programs to fortify agencies and parastatals in her bid to provide conducive environment for increased productivity.

“Government expects of Universities of Agriculture, rapid development of the knowledge and skills to increase local production of food and raw materials.”

He used the medium to seek a collaboration between specialised Universities and National Agricultural Land Development Authority, (NALDA) in order to ensure increased local production of food.

“To this end, NALDA has been re-constituted and re-established to promote mechanized agriculture. Government expects that specialized Universities of Agriculture will collaborate with NALDA to ensure increased local production of food.

“As we celebrate the young men and women whom this University has found worthy in character and learning to receive their certificates and degrees, I wish to commend the Vice. Chancellor and staff who have trained thern te become high level resources for our nation. As you look at the faces of these young people presented for University degrees, you sheuid fee: the joy that overshadow whatever frustration you have experienced trying to mould them.

Meanwhile, the school graduated a total of six thousand, six hundred and six students, (6606) with four thousand, one hundred and fifteen (4115), which comprised the 2018/2019 academic year.

The convocation statistics which as outlined by the Vice Chancellor and Professor of Food Science, Prof. Maduebibisi Ofo Iwe is as follows: Bachelor’s Degree- 5817; Post Graduate- 92; Master’s Degree- 454;
Doctorate Degree- 243.

In his remarks, the Chancellor, MOUAU, Emir of Gombe, HRH, Alhaji Abubakar Shehu Abubakar III lauded the efforts of the Governing Council, the University Management and staff in driving the University to greater heights, as he expressed immense gratitude over the mutual relationship between the University and the host communities.

Restoration of delisted courses in MOUAU: My example of effective representation… Rep Onuigbo