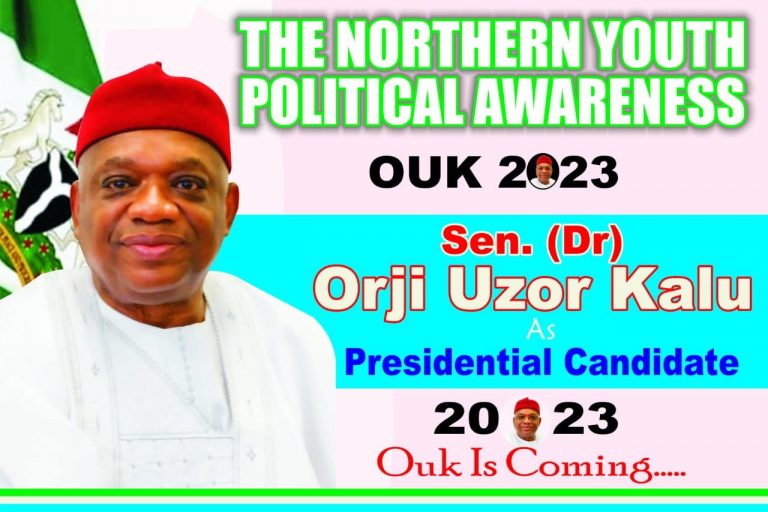 This is following the buildup into the 2023 general elections gains momentum, the pursuance of good governance by Northern youths is on top gear, as their search for a perfect successor to president Mohamadu Buhari intensifies.

With leaders and political bigwigs, showing interest for the job of the presidency from regions of the nation, a group under the assemblage of the Northern Youths Political Awareness For Orji Uzor Kalu are set to have a congress, where their choice for the 2023 presidential election would be officially and publicly unveiled.

Our correspondents in Kano, Osuagwu Nnaemeka, had it that this group, the Northern Youths Political Awareness for Orji Uzor Kalu, are in high spirit as they will publicly declare the Senate Chief Whip and former governor of Abia state, Dr Orji Uzor Kalu as their trusted candidate to continue from the legacies of President Muhammadu Buhari at the expiration of his tenure. Speaking with one of the youths, our newsmen gathered, as said, that the stage is set for Nigerians to know the stands of most Northern youths in the affairs of the leading trail of the nation, saying that the time is ripe for the southeast to be projected for this job, following their economic benefits and values.

Mallam Aminu, stated that the meeting which is slated to hold today in Kano is driven by the known capacity of the southeast region to economically revive the nation as he said. “Today is significant, if we must talk of the future of the nation. Gone are the days where political parties make their choice on whom succeeds Mr President. We’re committed and are ready to engage in the search for good governance that will in return, reshape and rewrite the nation’s economic stories. That is what we owe Nigeria.

“you can not talk about Nigeria politics without the North because we’re a major player in the political decision making of the nation. We have also refused to abuse such privilege, not to colonize leadership but rather, we’re committed to stretching our arms to other regions that we believe, have what it takes to revive the nation’s economic flaws.

“The congress today will tell more about our commitments to a better Nigeria. where all stakeholders are recognized in the capacity of what can be contributed to making great, our nation Nigeria”. He concluded.

The congress, scheduled to take place at the Ten to ten restaurant Zoo road, Kano state today, 13th February 2023 will comprise the coordinators from the 19 Northern states, in their commitments to nation building. The congress is expected to start 3:00pm. Stay connected as we bring you live updates.